A collection of athletics events with fun illustrations.  Covering areas such as running, jumping and throwing these tests were sometimes part of the original Ancient Olympics.

Some are single specialist sports and others are part of multi discipline events such as the decathlon or heptathlon.  For athletes who can run, jump and throw with great skill.

Many activities are part of the traditional school sports day - that rite of passage for students and a welcome break from sitting behind a desk.

​There are various types of events - long jump, high jump, pole vault and so on.  The Blue Riband event is the 100 metres, the one with the highest demand for Olympic tickets.  Considering it only lasts ten seconds or so it has a huge pull for fans, competitors and advertisers.

There are big problems in athletics caused by money.  The need to succeed, attract sponsorship and keep on winning create an environment where cheats prosper and are actively supported by the media, coaches, manufacturers and advertisers.  The crowds come to see celebrity heroes and the corruption feeds on that.

Outside professional athletics is a world where people find events they enjoy and push themselves.  A few seconds saved here, an extra distance or height there.  A new personal best.  These are the goals of the amateur athlete and are how the sports should be enjoyed.

The ultimate classic Olympian sport - the discus is a round flat heavy disc.  The discus throw means throwing that disc as far as it can go.

This is one of the most obvious athletic endeavours.  The pose is straight out of Greek sculpture with fine strong athletes and the simple disc.

The discus throw was part of the ancient Greek Pentathlon - a five day competition dating back hundreds of years BC.  It has been dropped from the Modern Pentathlon as the need for commercial marketing success overrides historical precedent. 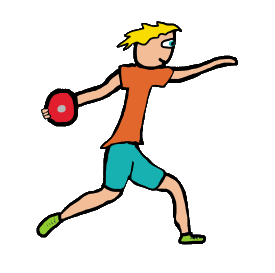 We have all thrown a hammer in our time - usually after accidentally hitting ourselves during some serious home maintenance.

The official hammer throw athletics event does not use a real hammer.  Not even a sledge hammer which would be impressive.

It is a weight on the end of a line which would be useless for trying to hammer in nails but is rather better for throwing.

The hammer used in the Highland Games does have a wooden handle.  They prefer pain over distance. 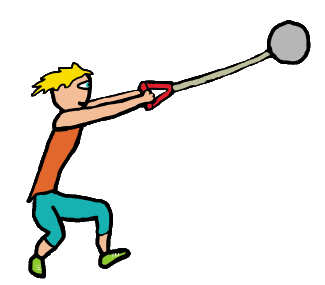 Tall athletes run towards impossibly high bar and back flip over it using the Fosbury flop.

​Next time someone says "You're for the high jump" explain the record is eight feet plus and you couldn't possibly match that without a step-ladder. 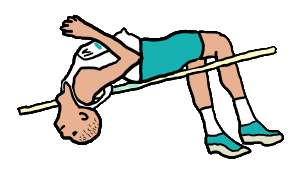 Combining flat out running speed with extra skill and effort - the hurdling is a fun racing sport.

Hurdles are not a big obstacle in themselves but on a long race, particularly say a cross-country event, the final few hurdles take the last bit of energy from the runner. 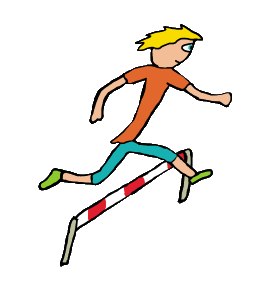 It is easy to see why the javelin is a sport.  It relates back to spears and hunting and is a skill that would be much in demand for people who wanted to eat something that wasn't a berry.

Nowadays the thrower is more likely to kill one of the umpires who measure how far the javelin flew.  There are no extra points for hitting them so just try to throw the spear as far as possible.

The javelin throw event is part of the decathlon or heptathlon where athletes with multiple skill sets compete. 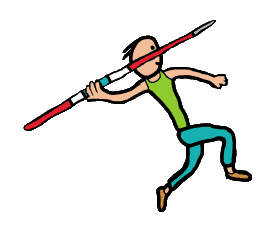 A stand alone event or part of the decathlon or heptathlon - the long jump is one of the ancient Olympic events.  It involves running to gain speed, a jump and the 'hang' - to stay airborne as long as possible to cover the distance. 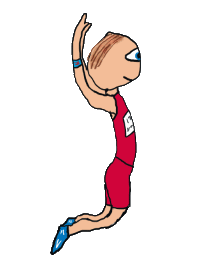 The 26 mile endurance race.  A two hour plus test of body against challenge.  A popular distance event for athletes of all abilities as shown by the appeal of famous marathons in major cities across the world.

The mile.  The four minute mile is one of the most famous landmarks in athletics history.  No longer an officially recognised Olympic event presumably due to metric considerations - the mile is still of major importance in racing with separate competitions for this distance.

There are combined events at athletic meetings.  They include elements to test different aspects of an athletes ability.  All round excellence is required.

Triathlon - swimming, cycling and running.  All round endurance tests for people who want more than running the marathon alone can offer. 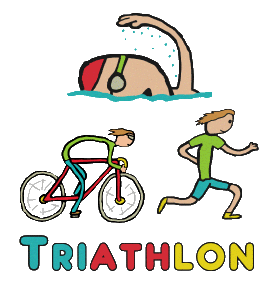 The pole vault involves running fast with a very long pole, planting the far end of the pole in the ground and using the weight, leverage and balance to vault over a high bar.

The record at the time of writing is over six metres which is about eighteen feet in English.  It is high.

How do they get started in pole-vaulting?  Do they start off with a short pole and small jump and gradually build up to the big pole?

Sometimes the pole snaps which is fun and a must for five second YouTube videos.

The 4 x 100 and 4 x 400 relay races involve 4 athletes running the distance and passing the baton to the next runner who waits.

They are only allowed to hand over and grab the baton within a certain part of the track.

Relay racing is a test of teamwork, trust and cooperation. 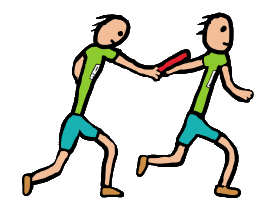 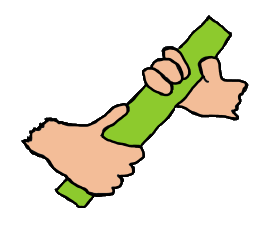 Running is the most simple Olympic pursuit and where it all started.  A Greek soldier ran from the Battle of Marathon to deliver a message to Athens.

There are different lengths of event from 60 metres up to the Marathon - all twenty-six long miles of it. 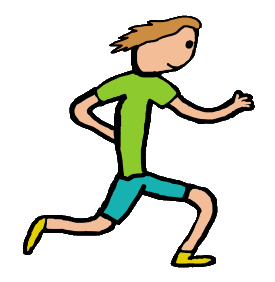 Heavy round ball - throw it as far as you can.  Part of the decathlon.

​Once we invented cannons and gunpowder there was less call for the shot put. 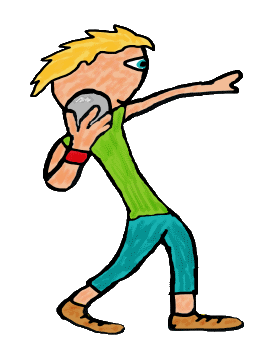 The glamour events of the Olympics - the shorter the race length the better.  10 seconds of excitement - hours or days of build-up - the 100 metre final is the ultimate athletic event. 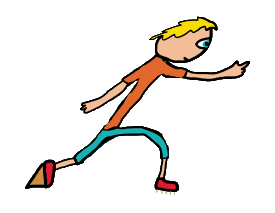 3,000 metres run with hurdle and water obstacles to sap the strength a little bit more.

Not yet pictured - this is a hop, skip and a jump event.  A run up to the hop, then the skip element and finally a long jump - all in one fluid series of movements.
More Sports >>