This fine aquatic creature deserves its own axceptional pun page.

It is time to change.

To strike a gentle blow for recognition and see what words - if any - rhyme with axolotl.

Here is a valiant attempt to create some axolotl based puns and wordplay. 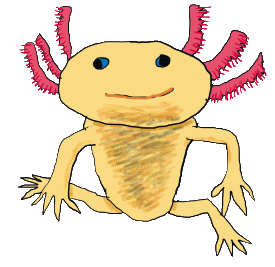 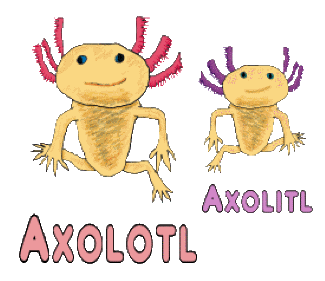 Sadly, rhyming, like most things, does not come easy for the Axolotl.  Here are some real words that rhyme, in case you need to write a poem to your pet.

Bottle - storing liquids mostly
Cottle - a mold for pewterers
Glottal - to do with vocal sounds
Mottle - describing a pattern
Pottle - old measurement for half a gallon
Throttle - go full-throttle
Wattle - earth and sticks mixture for building, or a plant 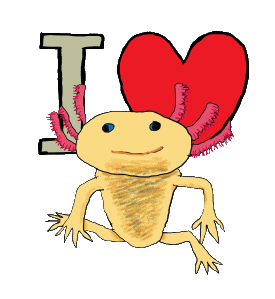 The Axolotl Song - a real song!

And some made up ones.
​
Hey Teacher, Leave Those Axolotls Alone
​​How Much is that Axolotl in the Window
Nothing Compares to Axolotl
Who Let the Axolotls Out

There should be an official axolotl star sign and one of those Chinese New Year signs too.

That would be cool and well-deserved.

People could be born under the sign of the Axolotl. They would be Axolotians and have certain traits such as swimming and not being particularly clever.

It is easy enough to group a few night stars together and claim they look like something.  There must be enough room to squeeze in a 13th sign of the zodiac.

Coming Up For Air

It was hard work trying to pick up references that link to the axolotl.

I blame myself a bit although it is entirely their fault.  If they had a simpler name then life as an amateur axolotl pun merchant would be easier.

On the plus side they don't really need a lot of added punning to generate a smile.  You only have to look at them.