A collection of business expressions, irritations, cliches and all that corporate garbage.

Handy if you need to know what the heck someone is talking about or if you just want a little light relief from the nonsense speak of up themselves idiots.

​Or management as they prefer to be called.

Here is a vague A-Z list of common business sayings.  Mostly the ones that really annoy me. 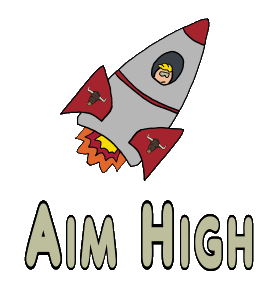 All Singing From the Same Hymn Sheet

As if any of them go to church or the business does not have access to a photocopier.

The team are all singing the same tune from the hymn sheet which is the philosophy the team leader wanted to inspire.  We are all on message and delivering the same coherent vision of whatever this weeks corporate goal is.

Some tasks take a certain amount of time.  There is no way to shorten that process regardless of the demands of the project.

Circle back means to answer a question at a later stage, perhaps after discussing with others offline or out of the meeting.

​I can't answer that now so will circle back later.  It is more positive than admitting ignorance or sounding ill-prepared.

As in an email that requests something by close of play.  It means the end of today.  A priority request where they try to dress it up a little.

Are we all playing around or in a play where we are acting out some kind of weird fly-on-the-wall documentary?

Quite cleverly it does not specify a time meaning you can spend the evening on it instead of going home.

Make sure all the detail is in place.  At the end of a long meeting where there are still a few loose ends to be tied off - "We need to dot the 'i's and cross the 't's".

Ducks In A Row

Get all your ducks in a row means to get organised.

It sounds a relatively simple thing.  Get those ducks sorted and we can move on with the next task.  One of those expressions that is ridiculous if you think about it.

How on earth can you get ducks in a row?  There are very few animals that will stay in any kind of arrangement willingly.

Elephant in the Room

Signifies a very big thing.  An elephant is big and in a normal room it would seem even bigger.

The phrase usually involves ignoring or being aware of the elephant - the obvious thing that requires attention.

A related expression is "Eating the elephant one bite at a time".  Having noticed it in the room the way to deal with it may be to start eating it.

This is how these phrases destroy the English language and gradually vanish up themselves.  Next we will be passing the elephant through our digestive systems and clearing up the subsequent mess.

The way percentages work is 100% means everything.  There cannot be more than 100% because that is not how mathematics work.

In business world most people give about 30% if you are lucky.  When the project manager tries to inspire his team to greater effort there is plenty of room to add 10% on top.

By saying 110% he does not really mean an accurate measure.  He just means "Please guys - try a bit harder than usual".

"It is as difficult as herding cats" someone will say.  Anyone who has tried to get a cat to do anything, let alone a herd of them, will know what that means.

It is impossible in other words.

They could just have said it was impossible but you wouldn't have that idea in your head which makes a dull office meeting briefly brighter.

Cats are mostly solitary animals.  That is probably why they are difficult to herd. 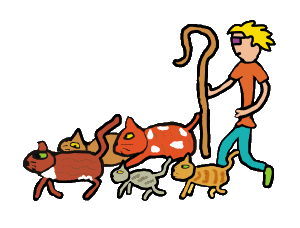 If It Ain't Broke Don't Fix It

People cannot resist fiddling, changing, inventing solutions.  Most things will continue to work with only minor maintenance if you leave them alone.  It is that urge to constantly re invent the wheel that throws a spanner in the works.

It's Not Rocket Science

The problem or answer is not complicated.  You guys are not designing a rocket.

This is intended to show that there should be a simple solution.  Complex business processes can be more complicated than rocket science which is essentially fill a tube with liquid fuel and set fire to it.

Means to share information with other people - frequently when the person transferring the knowledge has been deemed surplus to requirements.  In a half hour meeting with the new person who has been brought in cheaper or threatened with their own dismissal - the knowledge will be transferred, forgotten and that part of the project will subsequently grind to a halt.

In emails where yet more people are copied to a circulation list.  Usually an effort to spread or divert responsibility, or to increase the pressure on the person the email is targeting.

Keeping everyone in the loop so the email in boxes get ever more full.  So much better than saying "I copied your useless reply to the top bosses".

This expression always makes me think of Strange Fruit - which is not the same thing at all.

What the corporate ones mean is to use some sort of farming analogy to get their people reaping the easy rewards first.

​Instead of striving for the tempting but hard to reach fruit at the top of the tree - grab as much as you can from the lower branches first.

Quick win, maximise profit and the rest of the task can be outsourced to third-world child-labour when they have sold your jobs to the lowest bidder. 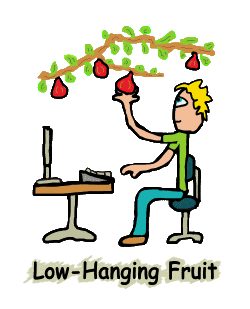 "Never assume because it makes an ASS out of U and ME".

How anyone can still use this hackneyed and pathetic expression is beyond me.  It was a once neat play on words.  It is used by seniors to juniors who have to laugh (or nod wisely) to show that they appreciate and understand the corporate jobs-worth who uses it.

Intended to show that there is no place in a team for Individualism.  We are all in this together... especially you.

They don't mean that.  What they mean is "I am going to interrupt you and ask you for help.  Although I said quick question I actually want a quick answer".

When the minor elements are trying to take control over the more important things.  Always keep sight of the main priorities and do not get diverted.

Together Everyone Achieves More

That seems to be the standard team mnemonic.  It is not bad.  Like many expressions it could do with being a little more snappy, a little more sharp.

Still. It will have to do.  One thing teamwork teaches is compromise.  Let's agree on it and move on.  Together.

In the image below the short word at the end is balanced with a red tick in the box.  Little details like that help the team to function - dot the "i"s, cross the "t"s. 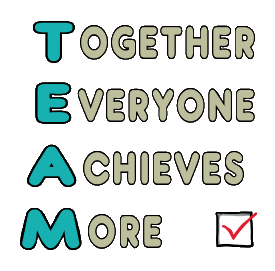 TEAM Together Everyone Achieves More Gifts >>

The great thing about a page of office expressions and the chance to draw a few cartoons is that these sayings never stop being invented.

The corporate world needs to be at the cutting edge of management speak otherwise all those gurus would have nothing to do.
More Sayings >>