Chess is one of the few board games that does not require a dice.  That might spoil it and knock the pieces over.  It would be a shame after all the effort they go to arrange them.

Expert players memorise all the openings and can think several moves ahead.  They always beat me.

​AI is now at a sufficient level to beat all humans including the top Russian grandmasters.  That is clever but pointless.  Chess should be a social duel between people - not bots.

Here is a slowly growing page of chess related puns and humor.

A happy chess ending is where the King gets mated

A knight to remember 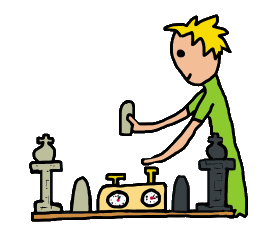 Time waits for no man - not even a chess player

That was a quick game.

It started poorly, lost its way in the middle and the end result was inevitable.

Time to throw the pieces across the room, smash the board and try to leave with some dignity.

Maybe dominoes would be worth a go.
More Puns >>