The second part of a list of popular traditional circus acts with illustrations, comment and gift-buying opportunities!

The act involves one person throwing knives at, or very close to, another person.

Is this act even allowed in these days of Health and Safety?  Let's hope so.

There is a wonderful balance between safety and excitement.

How close should the knife-thrower aim to the human target?  How much trust does the target place in the thrower?  Did they have an argument before the act started?

The more exciting the knife-throwing, the more relief when it is over.  It is a fine example of the real flesh and hopefully not too much blood entertainment that the circus offers.

Does it need saying?  DON'T try this at home! 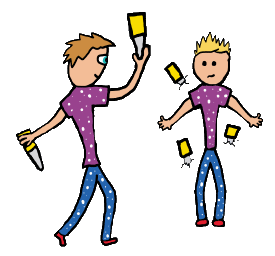 Although animal training and performance has no place in entertainment - the spectacle of the lion tamer and the lions is a part of circus tradition.

The magnificence of the animal and the bravery of the lion tamer were big draws for the traditional circus.

The picture below makes the lion taming act palatable for sensitive souls.  The lion is friendly but acts fierce, the lion tamer has no whip.  Off stage they are best friends.

​Sometimes the lion misbehaves if he doesn't get a biscuit.  One of the smaller clowns went missing a while back after cleaning the lion's sleeping quarters.  They found his red nose and one shoe. 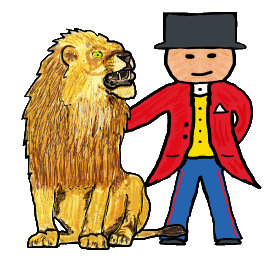 Magic acts can be part of a large circus performance.

The acts performed by a magician will tend to be large scale illusions creating a theatrical effect in the ring.

The rabbit below appearing from a hat needs to be big, able to ride a horse and ideally juggle as well. 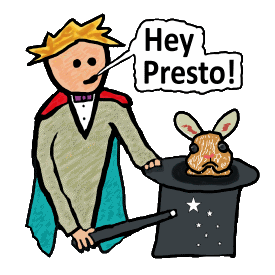 The circus needs to make every penny it can from the audience.  The entry fee should cover the cost but the profit is in the captive audience marketing.

While the ring is prepared for the next act - clowns and other performers wander through the crowd offering snacks, red noses or wands that light up.  It all helps to make a few extra dollars so audience AND performers can go home happy.

Plate spinning is one of those acts where the performance is more to do with building anticipation and excitement in the audience - rather than any great ability with the equipment.

The act consists of spinning plates on top of bamboo canes being controlled by the entertainer.  It is his job and skill to engage with the crowd and get them to help him spot which plate is in danger of wobbling off and smashing on the ground below.

​There is much rushing around as he somehow manages to spin eight, nine, ten plates at once and take his round of applause.

This is one of those analogies with life where we try to keep an eye on all our responsibilities - social, business, family and financial.  An endless round of keeping the plates spinning. 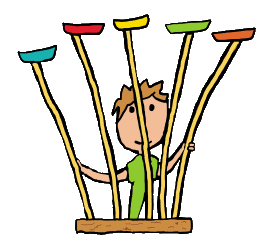 The boss of the show for the night - the circus ringmaster introduces the acts.

"Ladies, Gentlemen, Boys and Girls - Here are The Amazing Blahs".

He gets the crowd to show their appreciation for the previous performance and gets them pumped and primed for the next amazing act.

Sometimes he has to tell off the clowns for being naughty but hopefully tonight they won't get caught.

The mystic plays a pipe and the snake is hypnotised by the music.  It rises slowly from its basket.

This ancient trick or act is mostly performed in streets and sideshows.

It is not clear how much the snake is entranced by the pipe playing.  It may rise up because the basket lid has been removed and it wants fresh air.  Maybe it can feel the noise of the pipes and associates it with feeding time.

​Many snake charmers go on to be successful politicians and double glazing sales people. 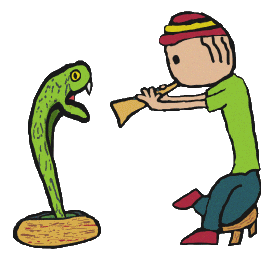 One of the immediate visual appeals of the circus is the arrival of the clowns and other performers marching through the town on stilts.

Impossibly tall people making a real impact, stilt-walking is still a feature of many parades.

For young children seeing these tall giants was a thrill.

The circus is coming to town!

Learning to walk on a  homemade pair of wooden stilts is definitely a fun thing to do at home. 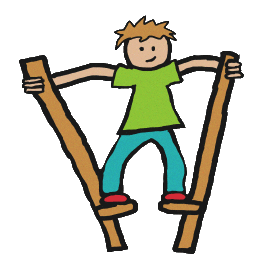 The circus strongman would often be dressed in a one piece costume.

​He could lift heavy weights, bend iron bars and hammer nails into wood with his bare hands.

Sometimes he might lay down and let his assistants break concrete slabs on his chest with a sledgehammer.

Fashion tip - that leopard print look is not easy to pull off.
ed: Not easy to get on either 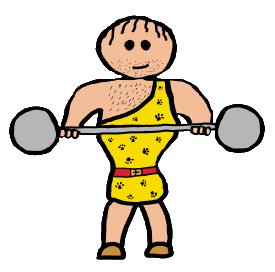 This act disobeys all sensible health and safety rules.

It is extremely dangerous looking and an absolute no-no for children who might be tempted to copy the act.

There can be trick swords or the performers might insert a metal tube before the act so the sword can be swallowed safely but surprisingly it is often performed for real.

The sword is passed into the body hopefully missing a whole load of important parts.

Knowing they are really doing it makes it far more difficult to watch. 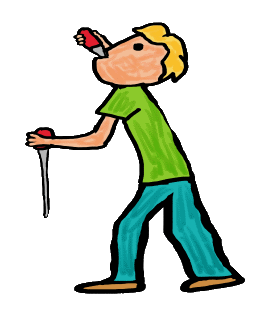 There are two types of tightrope walking in my mind.

The high wire - where a straight tensioned line is strung high above the ring.

The performer will hold a long balancing bar and walk across the line with much build-up.  Other performers may increase the excitement by not using a balancing bar or riding a bicycle across it.

Or the sloppy slack line with a clown-style artiste.

He will build up excitement for his line walking on a much lower line.  When he steps on - the line sags down to the ground and he does stumbling and falling which requires more skill than it appears.

​The tightrope is another circus act that has similarities with our own lives.  Taking those first steps towards a new challenge, maintaining an even balance in life.

Trampolines are often used as a safe way for trapeze and other high wire acts to safely return to earth.

They can also be a stand alone circus act with expert performers creating an entertaining and visually impressive performance.

The great thing about trampolining is the activity is available to anyone (with a trampoline) at any level.  From simple bouncing to multiple somersaults - it is a fun way to get some exercise.

While jumping and somersaulting imagine being in front of a thousand people at a circus - and try to think of a suitably cool stage name. 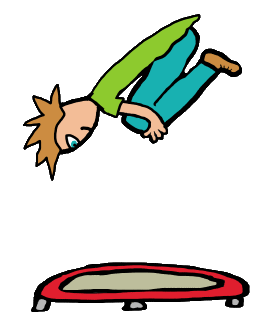 And so to the trapeze - the flying artistes who are the top act of the circus.

​Strong athletic men and women in sparkly costumes flying high above the applause of the crowd.

This is the spectacular act everyone looks forward to.

​The trapeze artists swing back and forward across the circus ring performing somersaults and catches.

This act is a perfect symbol of teamwork, trust and co-operation between two or more people.  They should include it on those team-building courses and see if anyone can be bothered to try catching the project manager. 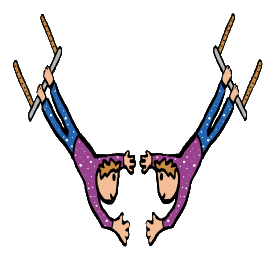 The unicycle is a bicycle with one wheel and no handlebars!  A single wheel, pedals and a seat.

This might seem like madness but an ordinary bicycle is challenging when you first start learning to ride.  A unicycle is like a more difficult bicycle.

​Difficult but not impossible.

For general balance and coordination it is impressive seeing someone riding a unicycle and juggling clubs. 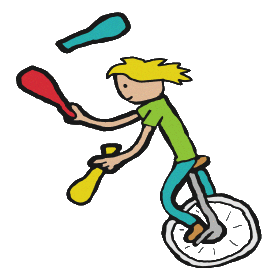 This act involves a steep circular wall up which motorbikes speed.  They climb ever higher using the power of the engine to keep the bike balanced at an impossible looking angle.

More of a sideshow act than a traditional circus one - the Wall of Death is a live act to enjoy for the thrill, smell and noise of it.

The Skills of the Circus

Although it may seem like old-fashioned entertainment when compared to the thrills of the X-Box or Hollywood - the circus should be appreciated for being real.    No CGI here!

​The performers are men and women who have learned their trade through hard knocks and dedication.  These skills are worth celebrating and keeping alive for future generations.

If you have children or want some traditional fun of your own go to the circus.  And in your free time maybe you can learn to juggle or ride a unicycle!
​