The A-Z of Popular Circus Acts

The circus is fun to visit and draw.  Bright colours, noise and spectacle add up to an entertaining mix of skills, humor and excitement.

From clowns to trapeze artistes there is something for all - especially children.  Many people remember their first visit to the circus and this collection is partly a stick figure homage to those memories.

In adult life there are lessons to learn from the circus.  Balancing acts, plate-spinning have similarities with busy working lives.  How we cope is whether we become a ring-master or backstage worker,  clown or juggler, or maybe a high-flying trapeze artist!

​​This page contains circus acts from A-Z.  Main ring performances are covered along with a few sideshow acts which the larger circuses might hold in a separate tent.

Without further ado and with a huge sense of anticipation here is your ringmaster for the evening.

Circus Ringmaster Gifts >>
"Ladies and Gentlemen, Boys and Girls, Welcome to the Circus!  Put your hands together for the first act of the night - the gravity defying geniuses, airborne adventurers, titanic tumblers - the Amazing Acrobats!"
​​
​<applause>

The acrobats or tumblers are athletes and gymnasts who run, jump, spin and tumble across the ring.

Little equipment is required apart from costumes, optional springboard, athletic performers with a strong one to catch and support the others.

​A typical act builds a human pyramid by climbing and bouncing performers higher and higher - each one being held by the supporter beneath them.

The successful completion of each leap and catch is accompanied by an exaggerated wave of the arm which encourages the audience to applaud.

​The tumblers are a great way to get movement, energy and excitement into the evening's performance. 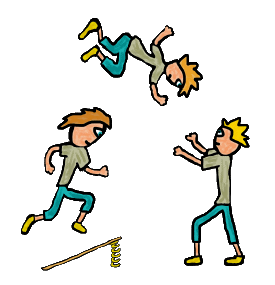 Acrobats and Tumblers Gifts >>
Solo acrobats are similar to the gymnastic floor performances you might see at the Olympics.  Using props like rings and sashes, they create a balletic and athletic spectacle. 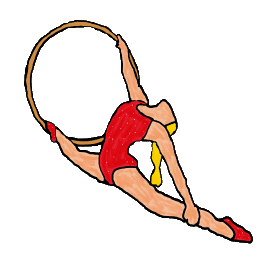 The traditional circus relied heavily on trained animals for drawing in the crowds.  ​From dogs and horses through to elephants, lions and tigers - show animals were a popular attraction.

Gradually people became concerned about animal welfare.  There are no animals who naturally do tricks in the wild.  To most people's relief the animal based circus act has largely disappeared.

An example of an old-time act is the seal balancing a ball.  Clever, entertaining and as we eventually decided - the wrong way to treat animals.

The expression "What am I - a performing seal?" illustrates the tricks and hoops we often have to jump through as part of daily life. 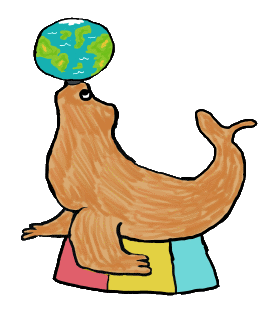 Where would the circus be without an audience?

The performance and survival of the circus needs a crowd of good natured people - adults and children - to enjoy the magic and thrills of the entertainment.

Gasp at the high flyers, laugh with the clowns and enjoy the spectacle of art, skill and danger that the circus provides.

If a travelling circus is coming to your area and you have a little free cash try to book tickets.  Share the experience with young children and friends.  Your goodwill and generosity will help to support this marvellous tradition of real entertainment.

Some circus acts involve the mysteries of the unexplainable.  Like the bed of nails which looks painful.

Does the showman enter a mystical state enabling him to ignore the pain of the nails?

Is there some trickery involving blunt nails and weight distribution?

An email from an artist who performed this act assures me that the nails are sharp and hurt!  Their other acts include walking on glass and a ladder of swords.  That is a hard way to make a living. 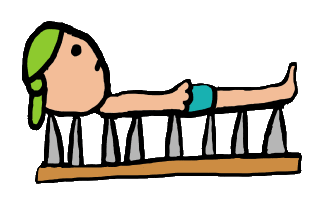 The Big Top is a name for the traditional tent used by the travelling circus.

They would rent a field from a farmer and build this huge tent where the circus is performed.

Inside the Big Top would be the Circus Ring where the acts perform.  This is a circle as its name suggests and the audience would sit around it - with an area reserved at one end for the acts to get ready. 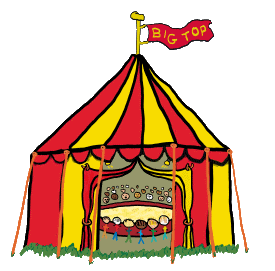 The clowns are the one of the most recognisable of circus acts.

A main part of the event they entertain the crowd while the arena is being prepared for other artists.

Although the clowns may put on a silly act they are hugely talented performers.  Many of them can tumble, juggle and fire-eat and at least one will be able to ride a unicycle.

​Some small children and large adults are scared of clowns.  Now who on earth would be scared of a madman with a big red nose, ridiculous feet and odd-looking clothes? 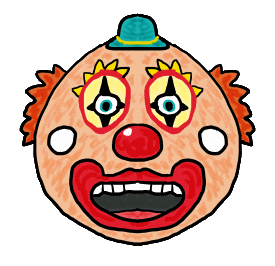 A person with a strong flexible and supple body who is able to bend into a variety of painful looking positions.

Sometimes described as double-jointed but that may not be a real medical term.

The act can involve squeezing into small boxes, large bottles, balancing on tables and chairs.  A common position is a complete back bend where the head of the contortionist ends up between their legs.

Some Yoga positions also require flexibility but they are more about achieving an inner peace and tranquility than the performance act of the circus or street contortionist. 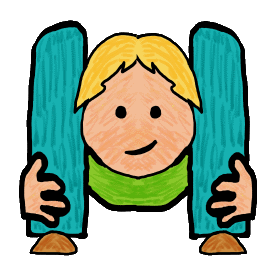 THE single best visual joke in the whole world ever is the custard pie gag.

Please don't think for a moment you just push the pie in someone's face.  That is funny but it doesn't scratch the surface of selling the joke to the audience.  The presentation of the gag, the anticipation, the timing and the delivery of the pie.

It is a high form of entertainment art - the ultimate in slapstick humour.

An experienced clown will hook the audience with what is coming.  Here is the pie, there is the fall guy and wait while I set him up for the delivery.  After much build up the pie is finally delivered to the face of the unsuspecting victim.

It must be a great feeling to make a tent full of kids roar with laughter and delicious delight. 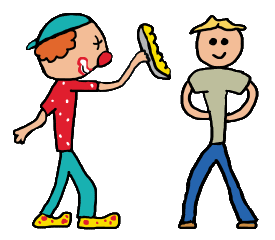 Or Escape Artists.  Tie the performer up, lock him in a suitcase, a straitjacket, suspend upside down in water - a whole range of dangerous looking confinements for the escapologist to escape from.

For the most part there are tricks involved.  An accomplice ties special knots which are easy to undo or there are false panels to escape through.

​Harry Houdini was the most famous escapologist of all. 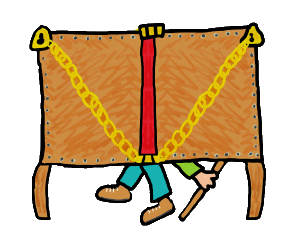 Fire eating is a spectacular looking act.  It appears far more dangerous than it actually is.

Otherwise there would be less fire-eaters.

They don't really eat the fire but mostly blow flames into the air.  There are skills to learn and for children brought up NOT to play with matches - it is very exciting.

Fire-eating is definitely a "Do not try this at home" form of entertainment.

If you need to get the same experience eating hot chilli might work. 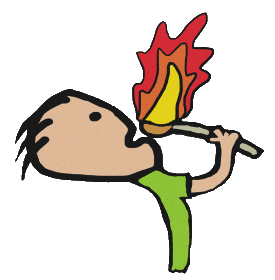 The freak show died out.  Although for some performers it was their only way to earn a living - it became less acceptable to modern society.

If you were very tall, fat, thin, short or oddly hairy there was potentially an opening in the freak show for you.  Possibly more scary than clowns for young people.

Elephant Man is a movie that shows how cruel this entertainment was.  A sad, but somehow rewarding film.

The hand balancing act is one of those simple skills involving someone who spends the entire act upside down.

There is a variety of balance equipment they use - one example is where the artist adds wooden blocks to gradually raise themselves higher and higher.

It is difficult to stress the lack of danger involved but they do their best to increase the tension.  A wobble here or there to give the impression of an act on the edge.

These performers have strong arms, a sense of balance, gymnastic skills and artistry. 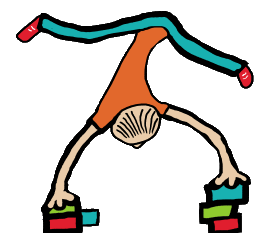 Horses running round the ring while a rider stands up, turns round, jumps on and off.  If you have ever ridden a horse or sat on a pony you will appreciate how hard that is to do.

Trick riding or equestrian arts is an old skill dating before the circus.  Possibly created by the Cossacks who used it in warfare.  Quite how they used it is a question for another time.

Extreme dressage could be another way of describing it.

​An expert circus or rodeo trick rider is pictured in the design. 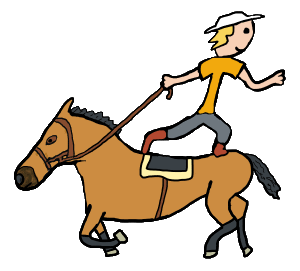 This act involves a man climbing into a cannon and being shot across the circus ring into a safety net.

He climbs in and waits patiently while the fuse is lit.  There is a loud bang, lots of smoke and our hero is fired all the way across the stage - hopefully landing in the large net in the target area.

With the eyes of adults we might suspect this of being an act but to young children it is very real.

​There he is!  And still wearing his safety helmet which helps to hide his face.

One of the few acts where the performer always gets fired. 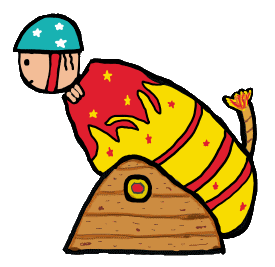 Juggling is a skill you CAN try to learn at home where learning to juggle three balls is a real achievement.

Jugglers in the circus can do way more than that.  ​Several balls at one time, clubs, hoops, burning sticks, knives - they juggle an extraordinary range of items.

Juggling is one of my favourite performance acts.  It requires practice, hand-eye coordination and a fun accompanying patter to keep the crowd engaged. 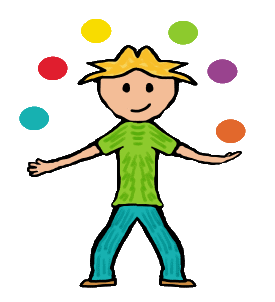 Part 2 of this Circus tribute contains lots more acts from Knife Throwing to Unicycling - including Snake Charming, Trapeze and more.
​