This is a fun piece discussing ideas for creating your very own super hero.

From his name through to his secret weakness, enemies and all those lovely comic book elements in between.

Unsurprisingly, Marvel and Disney have pretty strict copyright on their heroes so I had to draw my own.  But that is the point of this article.  How to create a character that is humorous, easy to draw, and you can build some tall tales around.

The guy is going to need a cool name and one that is not already trademarked or registered as a web domain.

There will be a whole series of tie-ins so we need unique, catchy and awe-inspiring.

Mostly they seem to add "man" on the end - Spider, Super and Bat being examples.  Something like "Kevin" is not a very good name for a superhero.

A comic super hero has to look good.  That often means a fine set of muscles and a skin tight costume to show them off.

A cape is required although it serves no obvious purpose except as a wind-speed indicator.

He might have a belt, backpack or handbag to put special equipment in.  Scrub handbag unless you have a tie-in with a Gucci male accessory line.
​
​My first hero in the picture does not have a whole lot of anything BUT he does have a cape.

He is called Bubble Man.  We can start with that and build. 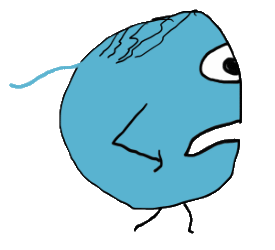 Your hero has to have super abilities.  Able to fly is good or to move very fast in different ways.

He must be way tougher than the average human but only a little bit tougher than his sworn enemy - who will also need a costume, powers, back-story, etc.

Laser eyes, ability to bounce, stretchy, on fire, equipped with large hammer - there are many examples of these powers.

With today's health and safety obsession it is wise to choose something that children will not be tempted to imitate in a dangerous way.  Bouncy mattress man is probably safe enough.

All heroes need a special introduction or phrase that immediately identifies them to their audience. A call to action whenever danger or peril threaten to disturb the equilibrium of society.

The Superman "Is it a bird? Is it a plane?" is an excellent example.

"When danger threatens only one man can save the world" is the sort of thing.

So far my hero Bubble Man only has  "Is it a fat blue bubble?" which may not be good enough to go viral.

All comic book heroes have an alias.  This enables them to take time off from being super.  They can establish a convincing double-life for themselves.

When danger threatens they will quickly change into their costume.  Sadly it is hard to find a telephone box these days.

Our superhero maintains his cover by appearing in a popular TV comedy programme called the BUbbErs.

​Update: Due to popular demand "The BUbbErs" has been cancelled.

Every superhero has to have an enemy who is determined to defeat him.  They plan to rule the world, steal the money and get the girl.

So as well as dreaming up your superhero you need a suitable enemy as well.  He needs to have his own costume, name and special powers - and maybe a whole team of helpers too.  It is important your hero wins against all the odds.

It is also important that you make it clear which one is the villain.  Things are not always as straightforward in the real world.

Chances are a good current villain will be a middle-aged white male with right-wing tendencies.  It is important to keep banging out the message, even in comic books. 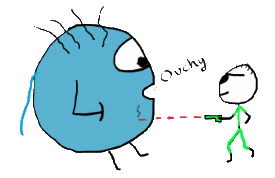 If our hero was invincible the stories would be a little dull.  Danger is important to spice things up.

The guy will be susceptible to certain substances or methods of attack that will only be known to their enemy.  The bad guy will have researched this on Google and created it in their evil underground laboratory.

The classic example is Kryptonite and its effect on Superman.  Make sure the weakness is not confused with a normal allergy like hay-fever. That would lower the credibility of our super hero.  Sneezing is not cool.

Update.  There is nothing wrong with allergies or sneezing.  The above was an ill-judged tasteless remark.  A better weakness might be a tendency to believe in conspiracy theories.

The hero may have lost his parents as the result of an awful crime he was too young or powerless to prevent.  That will inspire him to toughen up, invent some super stuff and spend the rest of his life fighting crime.

He may have come from another planet and been grateful to be granted refugee status on Earth.  An irradiated insect bite is a good way for fake science to get involved.

Sometimes our guy will suffer a short bout of depression where he briefly wonders what is it all for.  Just as it all seems hopeless someone bad will appear and he will snap out of his gloom and bash them mightily.

The comic-book hero will need to have features which are easily recreated in Chinese plastic factories.  The model versions can be piled high in stores ready for the film release and his image used to sell fast-food and fizzy drinks.

The money from this merchandising can be used to save the world a bit more.  Or spend on yourself - whichever.

The branding such as Disney and Marval have is worth a fortune.  Compare the prices of two plastic toys - one with branding and one without.  If you are a parent with child there is no choice anyway.  Kids love branding.

A Meeting to Decide on a New Super Hero

While trying to sort out my own hero I wondered how the experts do it.  What the office meeting is like where these geniuses throw ideas around.

The boss will demand that they come up with the next big thing.  The new hero needs to appeal to a wide demographic across religious beliefs and political leanings.  They must be non-controversial and easy to manufacture in their Chinese sweatshops.

The guys have an hour meeting to come up with something better than last week's Small Monkey Man.

​The finest minds in comic-book creation get to work.  Names are shouted across the table and they use the whiteboard to sketch designs.  The boss dismisses them all, slowly losing his normally calm and friendly demeanour.

Finally the new guy pipes up nervously.  "What about Bubble Man?" he says.  The old timers laugh.  They had a Bubbleman failure way back in 1963.

"He is round, blue and can leap very small buildings" says the new guy.

The boss is delighted.  He congratulates new guy and the others immediately join in with some camaraderie and back-slapping.  "You nailed it" he says "What's your name?". 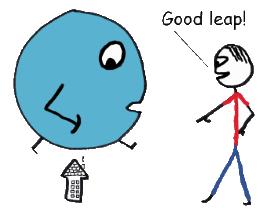 I will be creating my first and probably only comic-book hero very soon using the guidance from this page.

Unfortunately we will have to make do with Bubble Man for now.  He is a character that seemed to have some mileage but it was tricky to sort out the special powers.

So far he can make bubbles and leap.  That may be enough to save the world but we will have to wait for the film to come out to see if he defeats the villain and gets the girl.

Spoiler alert.  Of course he does, defeat the villain that is.  Turned out Bubbleman wasn't all that interested in girls.
More Art >>