This is a largely misleading article about London, the UK and Englanders written by someone who has that British sense of humour.

We mock ourselves, our country and pretty much everything in a downbeat fashion that makes us oddly happy and contented.

London is genuinely a brilliant place to see.  It has history, architecture, wonderful views and up to date stuff. It is a major capital city that is clean, modern and thriving. Visitors are very much welcome.

Even though the 2012 Olympics are finished, the Jubilee celebrations over and everything is back to being shut again - London is still the premier place to visit.

Despite astronomical prices, rude inhabitants and rubbish tourist attractions it might be the perfect place to send your wife or mother-in-law on a mini break while you go somewhere nice with sunshine.

For a vacation, stopover or weekend trip you need to inform yourself with this excellent travel guide for adventurous explorers and pilgrims everywhere.

From swimming with dolphins in the Thames, through a hair greying trip on the world's slowest roller-coaster (the London Eye) to having a cup of tea with the Queen in Harrods All You Can Eat Spud And Cabbage Buffet - there is much more to London than the Blitz and Boris Johnson.

Wander down Carnaby Street and see if you can spot the Beatles or Peter Sellers driving one of their famous 'mini cars'.

​Or come right up to date with the latest in techno grunge rap hip hopsters in any one of the three small London nightclubs.

Here are some humorous tips for the intrepid international traveller, the local day-tripper or just the curious who might go there one day.

London Heathrow airport is one of the most modern in the world. Aeroplanes can land and take off there on the fine long runway which was recently reseeded.

You can reach your destination in London City within three days using the high speed shuttle service - and with a bit of luck your baggage will join you before the return home.

Should your bags disappear en route they will be transferred to the historic left luggage holding centre where specially trained thieves will sift through the contents for anything of value.

The runway is closed on Sundays to allow the Queen’s polo ponies to graze. Other local airports such as Luton and Gatwick run a half day service every other Thursday.

The Tube or London Underground

We don’t call it the subway in England. The underground rail network is called the Tube. A clanking, random, sweaty mode of transport – it is a miracle that it works at all. But it does.

One of the delights to be sampled in London is at 7pm when the London Underground closes for the night, and you are the last person on the platform or killing zone.  Whose are those footsteps echoing down the corridors? Jack the Ripper?

In seriousness, the Tube is the best way to get around London... and to leave it at high speed when the break is over.

In order to navigate London successfully you simply need to memorise the tube map. 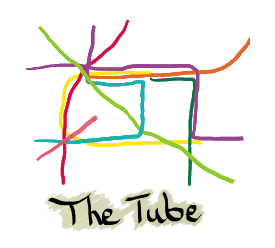 A Cockney is someone who was born within the sound of Bow Bells which is presumably a church in the East End of London.  You are more likely to hear Somali than Cockney in the East End these days but they are picking up the lingo remarkably well.

The idea of Cockney speak is to replace a perfectly reasonable word with one that rhymes. So instead of going up the road - road rhymes with toad - add another word to confuse the foreigners - frog and toad - and then get rid of the rhyming word.

"I am going up the frog".  This is impossible to understand and one of our national treasures.

Remember to only use the first word in the expression or you will look like a middle class fool.

There is also double rhyming slang where the expression moves even further away from the original word.  "I fell on me Arris".  Arris is short for Aristotle which rhymes with bottle - bottle and glass means ass.

There are many more of these but you can always just nod politely and offer them some money to go away.​

After the Brixton riots of 1981 the Royals were toppled and replaced by a collection of D list celebrities voted for by the successful rioters. They have since settled into Buckingham Palace and are much loved.

Never say anything against the New Royal Family when in London - all English people are under orders to love them and are watched by the much feared security service for careless words.

​Quite sensible people and David Icke believe that the Royal Family are actually shape-shifting giant lizards.

The UK was connected to the internet in 2009. It is believed that as many as fifty people may use it on a regular basis.

Based at Bletchley Park, visitors are reminded that a two pin plug and some sticky tape hold the whole thing together – so remember to save those longer emails regularly!

We also invented the language of the internet. This is useful because the English refuse to speak anything else.

Much like the American Baseball World Series, the croquet equivalent is played between two teams from neighbouring villages. The whole of England stops while this seven day event is on, and it is streamed live in HD by Sky on the single available televisual channel.

The English people learn this game from an early age; it is part of the compulsory education for school children . The top players earn small fortunes, and their wives and girlfriends often appear in Hello magazine.

If you are coming to England - get some practice in first.

There have been rumours of drug-taking in recent years but the top players use nothing more than a strong cup of tea.​

The English believe they are superior to all foreigners, especially Americans. They are embarrassed by this and therefore act in an inferior manner. This can be very confusing.

Even when annoyed or distressed by a lack of tea they will still be polite.

Don't fall for it. And don't try to understand. It makes no sense.

Much as you might wear a backward facing baseball cap in order to visit the Vatican (Pope City), it is important to purchase a bowler hat on entry to the UK.

These are available at any high quality airport gift shop for only thirty eight English pounds for a plastic one, along with the red telephone box (now gone), the red pillar box (soon going) and the red bus (cancelled).

Although English heritage has largely fallen into disrepair or been sold off to the Middle East - be assured that visitors will be able to buy all these souvenirs as they exit through Ye Olde Gifte Shoppe at Terminal 5.​

The traditional British cup of tea consist of two spoons of sugar, milk, PG Tips and hot water.  It is a foul warm liquid that is the national drink.

Never refuse a cup of tea; this would give great offence to a little Englander.  And never drink right to the bottom either.

Some psychics will tell you they can read your fortune by studying tea leaves. They can't.​

The same name is applied to the custom of having a snack at precisely 16:00 daily.

The only food on offer will be scones (a hard doughy indeterminate cake mix), jam and cream.

This will be accompanied by more bloody tea served from a ludicrously expensive china pot in very small china cups. If a person is making this for you in their home, which is highly unlikely, they will mutter frequently “one per person and one for the pot”.

Pretend to be wildly amused by this quaint custom and don’t touch the scones.

England is positioned ideally within the temperate zones. A gentle warm breeze will start the day, with Mediterranean temperatures for the late morning and afternoon.

Evenings are warm but then cooling sufficiently for a good nights sleep. Nowhere has air con apart from the expensive hotels.

The summer season lasts from March to November, and it should be a pleasant arrival at Heathrow in your shorts, novelty t-shirt and sandals.

In truth, England has a few nice days a year.  The rest of the time it is at best variable and at worst grey, rainy and windy.

You will need an umbrella.​

We are proud of our Parliamentary system although naturally we hate the politicians.

In the old days the people were governed by rich aristocrats who cruelly taxed the peasants and made them fight in their wars.  Now we get to vote for which rich aristocrat governs us.

The visitor to London will want to see the Houses of Parliament.  They can get within twenty miles before being detained for ten weeks under Ye Olde Terrorism laws and get a free rendition holiday to Egypt for an extended break.

Tip: Do not use your camera anywhere and try not to look like an Arab.

When encountering an English person who is attempting to walk through the same gap as you they will stop and say “after you”. This action may be accompanied by exaggerated hand gestures and / or bowing. This does not mean you can continue. That would be the height of rudeness and could lead to a fight or even worse, a loud ahem.

You must halt immediately and say “after you”. The English person will then say “oh no, after you”. Do not go. It’s an etiquette trap. The English spend all their lives practicing this. They will always win.

Helpful Phrases for Use in London

Practice muttering these to yourself. The idea is not to directly address anyone and you don't need to know the precise meaning.
​
These expressions of misery, apology and mild abuse are what made this country great. In truth we love being grey and slightly damp.

London welcomes visitors and we hope you enjoy your stay.

We may moan about you coming here, your lack of manners and being foreign – but it would be nice to have a paying guest and we really need the money.