Celebrating the often humorous accidents of language made especially common by the mass ownership of mobile phones and access to social media.

This page is not for picking on those who can't remember all the twiddly rules of English.  It is for simple amusement where the incorrect use leads to unintentional humour.  Sometimes the mangled expression is better and has additional meaning to the original.

In time this should be quite an extensive page.  Maybe it will become part of a course for those who need a little up-skilling of their vocabulary so they can post on Twitter with pride.

What is extraordinary are the number of professional journalists who cannot safely string two words together and yet they are allowed to talk to millions through TV, newsprint and the new media.

It is a Grave New World to coin my very own wrong expression.

Air On The Side Of Caution

It should be 'err on the side' but who has heard of err?  Whereas with 'air' we can see space symbolised to allow caution plenty of room.

The poster was "waiting with baited breath".  Oh really?  So he had laid a trap in his mouth, opened it and was waiting to see if anyone took the bait.  Perhaps he was being clever and deliberately misusing the expression in order to dance with the language.

It is more likely he simply does not know the correct spelling and origin.  It is "Bated breath" and it comes from the word "abated" which means suspended.  When used correctly it provides an image that someone is holding their breath while waiting for the event to occur.

Not some moron opened his mouth and inside was a mousetrap with cheese.

This almost works as a description of someone being cautious with their actions.  Not the whole bet - just the edge of it.

The correct expression is "hedging my bets" where hedging was to used to secure a piece of land.  Edging may well be more descriptive in this case.

From a comments section comes the glorious "escape goat" term.  Instantly conjuring up images of an athletic mountain goat leaping to escape its pursuers.

They may have meant "scapegoat" which is a person who is used to take the blame for failings of others.

Light Under The Bush

In a supposedly quality newspaper written by a journalist who has presumably achieved a degree comes this expression in an article.  "He shouldn't keep his light under a bush".

Absolutely he should not.  He should pay mind to the English language and keep his light under a bushel.

These seem to be actual words given the amount of times they are used by politicians.  They are based on the perfectly reasonable "misheard" where someone genuinely didn't hear something correctly.

Now, these lying corrupt people freely use them to conceal their lies or wrongdoings.

Innocent, if foolish, people making typos on the internet are one thing.  But political masters playing games of half-truths are something else.  Nasty people.

I am not sure what a mute point is.  Perhaps it is a point that is quiet, small and not worth saying loudly.

A mute point can be offered up but people should ignore it.  In real life conversation it would be said with some embarrassment so as not to disturb any important points that are being made.

No one should take any notice of it.  If it is a point made by dumb people using sign language then wave back and give a friendly smile.

The real expression is "Moot point" but as no one knows what "Moot" means it is fast becoming meaningless. 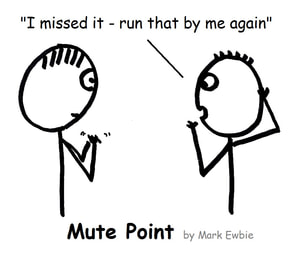 Some line in a song from Chitty Chitty Bang Bang perhaps?  A new brand of sugary treats for children?

​Sadly this is fast becoming regular estate agent speak for a bathroom attached to a bedroom.  They hear the words and type them into their property descriptions.  The spell-checker is happy and presumably more and more people think that "On Sweet" means something.  They may insist on it before long.  "Oh yes - we have an On Sweet bathroom don't you know".

The original and correct wording is "En Suite".  Another French expression that we can't be bothered to learn properly.

When an expression is recalled with no idea of where it comes from or the correct spelling.  The "per say" example like most of these comes from a forum post.

"I am not opposed to whatever per say..." begins the contributor.  I guess they forgot their old Latin lessons where they would have spelt it "per se".

It wouldn't matter at all except anyone who uses Latin to sound clever ought to spell it correctly.  Otherwise some of the impact is lost.  Does it matter?  Not really.

Pillow of the Community

Either someone heard this incorrectly or their predictive text assumed wrongly.  The idea of a "pillow of the community" is an obvious one -  a comforting and supportive person always there to count on.

The correct wording is "pillar of the community".  An old-fashioned way to describe a key member of local society.

Sailed Down The River

Love this one.  The forum troll wanted to use the expression he had heard before and liked - so out it popped.  And you can see why he liked the imagery.  Someone had been sailed down the river, like an unwilling boat I guess.

​Unfortunately the real expression is "Sold down the river".  I think Sailed is much better.

I kid you not.  This came from a reporter on the TV news who said someone or other was going stir fry crazy.

Rather than shaking my head and bemoaning the education standards that lead journalists for goodness sakes to be unable to use English properly... I think we should celebrate the accidental inventiveness of the human mind.

With luck many people will have watched that news report and 'learned' a new expression.  All over the world they will be saying "Oh man - I'm going stir fry crazy" and we will know exactly what they mean.

Even better - if they want a picture of it then I have drawn one.

My thanks to the new reporter on their first, and possibly last, assignment for the idea. 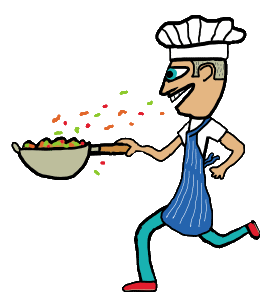 Those lucky rich people who keep all their money in offshore tax heavens.  A particularly apt misused expression as a tax haven is surely a wealthy man's version of heaven.

The Right to Bare Arms

A good pun and bit of fun when referring to the Second Amendment of the US Constitution - the actual words are the Right to Bear Arms.  An important statement for opponents of gun control or those who want some protection from government.

The occasional "right to bare arms" is used by people who don't know any better.  It is their Constitutional Right to be stupid.

This one from someone who claims to be professional writer.  Pity they don't know that "throws of change" is actually "throes of change".  A process that involves struggling is the definition.  Now "throws" almost works as the mental image is similar - making an effort to throw something perhaps.

Let's throw everything up in the air and see where it lands.

In response to some riposte or witticism on Twitter - "too-shay" was typed.

You can hear what they meant.  Maybe they didn't want to attempt the accent required in the French word - ​touché.

It is nice that they put some emphasis into the first part - the "too".  "To-shay" would not have the impact they required.

It shoud be toe the line.  Your toe is at the line - behind it.  Not stepping on it.  Generally behaving.

Some internet fool is trying to tow the line.  Where to we don't know.  It's anarchy out there.

A poster is expressing surprise at an event.  "I was just doing such and such and then WA LA it happened!".

What could it mean?  Ah... Voila.  The French expression for surprise and delight.  "Voila - it happened".  That would be better.

It seems doubly ironic that a graceful way of expressing something should be reduced to the equivalent of double fries with a coke and burger.  The Walmartism of English.

English - The Language of the Internet

English is facing a multi-pronged assault as never before.

Declining education standards and its adoption as the language of the internet mean more words than ever are being written by an army of illiterates and second language speakers.

That means more scope for mistakes and howlers.  It also means that at least some of those errors will become part of our language.

So don't knock it too much.  The new literacy is coming...
More Sayings >>