Unable to afford a bag of gold coins it seemed creating a celebratory page of gold puns might be the next best thing.

Gold has a fascination for people being a solid store of value - depending on the spot price of course.  It is real, tangible and far removed from the fleeting electronic trades of shares, bitcoins and Groupon coupons.

Invest some time in this page and see a return on your interest in terms of precious information, punning and humor.

In order to make this page into a more substantial offering there may be some mention of other precious metals - until they have enough for their own page.

In 1999-2002 the Uk Government sold roughly half the country's gold reserves at the lowest price possible.  Estimated losses were in the billions of pounds.

The Ratner Moment.  Gerald Ratner ran a successful high street chain of jewellers.  At an after-dinner speech he made two comments which nearly collapsed the company and forced him out.
"People say how can you sell it so cheap.  I say because it's total crap"
"Our earrings are cheaper than a prawn sandwich... but they won't last as long"

King Midas could turn everything he touches to gold.

Sounds like the spam adverts where investment people promise to turn your hard-earned savings into money mountains.

But Midas was for real - or at least Greek myth.

Sadly not all that glitters, etc.

As everything he touched turned to gold poor King Midas ruined his life.

You win some - you lose some. 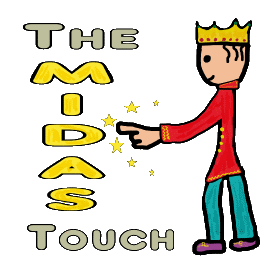 A gold sovereign is a symbol of tangible value.  It is something you can hold in your hand - away from the tax man.  It is a real item rather than numbers on a bank statement or the latest share price.

It is almost a rebellious gesture to put your hard-earned money into something you can actually hold instead of allowing others to make money from your savings.  Especially after the big crash of 2008 there are few institutions that retain much trust.

Gold. For when you want to invest in something real.
More Puns >>