One of the longer proverbs "A Nod is as Good as a Wink..." takes some effort to understand the point of it.

The acts of nodding or winking could be used in conversation with someone to help stress a point.  "Do you understand?" they might be saying.  A blind horse would not see the gesture so it becomes pointless.

The meaning of this expression is to always make yourself clear.  Somewhat ironically it is not the most obvious of proverbs itself.

Close The Stable Door After The Horse Has Bolted

When people take a preventative action after the event.

A building catches fire and they subsequently instal sprinklers and alarms.
A house is burgled and they fit a burglar alarm.

And a horse ran off so someone shuts the stable door.  It's too late!

Once an activity is underway it is unwise to change it.

If you are riding a horse through a river it is a poor idea to try changing over to another horse.  So plan what you are going to do before you jump on the horse and try riding it through fast flowing waters.

Don't Look a Gift Horse in the Mouth

This expression means that when someone offers you something you should not be too choosy about it.

​If it is a genuine gift then just accept it.

The idea is that you should accept the gift horse or any gift with gratitude instead of checking every detail. 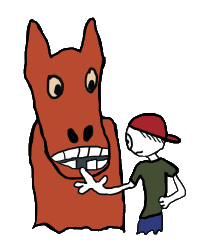 Don't Put the Cart Before the Horse

The standard arrangement for a cart and horse is with the horse in front pulling it along.

Putting the cart in front and expecting the horse to push it would lead to unsatisfactory results.

The cruel idea of someone using a whip on a dead horse illustrates the pointlessness of the exercise.

It is often used when people (or horses) simply cannot work anymore no matter how much you try to make them.  There is no point in flogging that dead horse any longer.

Tilting at windmills means to attack imaginary enemies.  In other words to waste time addressing problems that do not exist or cannot be resolved. The cartoon shows a farmer trying to get his proverbial horse to drink some water.

​He has dragged this ungrateful animal all across the field in case it was thirsty.

"Look, there's the water!" says the farmer but the horse isn't having any.

What this means is that you do everything right, set it all up and still your expected result may not happen.  Be careful not to get your hopes too high.

As with so many of these expressions - it is often only the first part that is said.  The "Horse to Water" bit.  The saying is so well known among English speakers that nearly everybody knows the second part and the meaning. 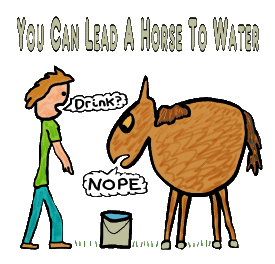