This article contains a five minute short series of steps to draw your very own stick giraffe.

I figured that one of these wonderful creatures is a fun thing to draw - a change from trying to do dogs and cats.  It turned out to be fun playing with the basic idea so it seemed worth sharing this artistic voyage of discovery.

As I set sail up the Amazon armed only with my trusty pens, paper and a native called Bill - we came across a long-necked animal...

The first step which is also called step one is to think about the giraffe.

What do we know about this magnificent creature?

The neck!  That is the single most important thing.  A giraffe with no neck is like a horse or something.  So the first thing to do is to get that part right.

In the picture I show the importance of the angle.  Imagine the beast reaching up to the highest part of a tree to eat the juiciest leaves.  That is what artists do.  They become the creature they are drawing.

​Obviously I keep my food in the fridge rather than half-way up a tree but that is the benefit of imagination. 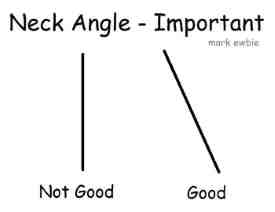 The head is not exactly round.  It is more oval in shape.  If you have a grape you could trace round it.

If you don't have a grape then I am not sure what you can do.  You could try drawing the shape by copying from this page but that is a very difficult thing to do.

Perhaps if you think of a ball and jog yourself a couple of times while you are drawing it will come out as the right shape.

Whatever you do - don't give up!

​Or give up for a while and then have another go. 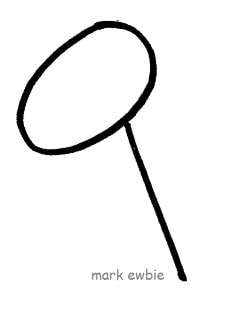 Draw a couple of eyes - or one eye if the giraffe is sideways on.  Which it is.  So just draw the one eye.

Then plop a nose on wherever you fancy.

All cartoon animals have smiles so draw any type of smile expression you like.  The less exaggerated it is - the more realistic your finished drawing will be.

Finally we have a slight problem area - the horns.  No one knows what giraffe horns look like so do some twiddly bits on top of his head.  It will be fine.  There are no marks for this unless your teacher has set it as a school project in which case we are all doomed. 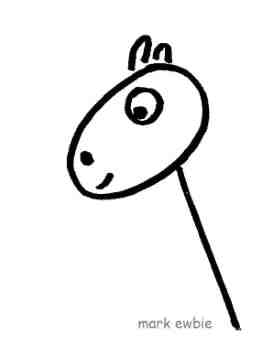 Not really.  There is a load more drawing to do.  Now we need to add the body.

I tend to draw fairly fat animals with a big oval shape.  It is not very accurate especially for a giraffe because they are quite slender creatures.

You might want to experiment with what looks best.  Fat is friendly in cartoon style stick drawings so that is a plus point.

On the other hand if you were selling the giraffe as some sort of healthy marketing message we would want to slim him down.

Let's not get hung up about body issues. 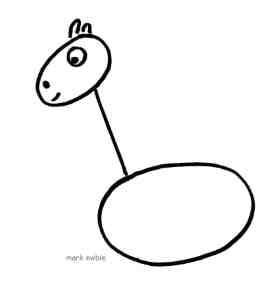 I should have labelled these steps.  This is the leg step.  Possibly the easiest part to do.

Like most creatures, the giraffe has four legs - unless it had had some sort of accidental leg incident.

That could be caused by falling into a crocodile infested river where it was only saved by a curious hippopotamus.

In our picture we are sticking with a traditional style leg arrangement.  I am old-fashioned like that.  None of that Picasso nonsense with a leg coming out of his ear for example.

Four good long legs is what our giraffe fellow needs. 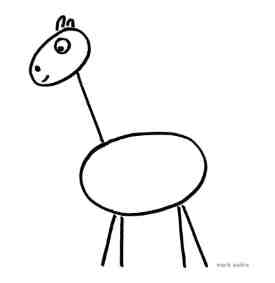 Like the horns - the giraffe tail is another mystery.  I think it is a short and insignificant thing so that is how I am drawing it.

There are no prizes for tails on this website so no real need to Google it.  One day I might check out real giraffes and either be delighted or a bit sad.

"The tail was wrong" I might tell my psychiatrist and he would charge me four hundred dollars for the privilege.

I think the point is that if YOU are happy with the tail and it is YOUR drawing then who is to judge or argue about it?

Enough about the tail. 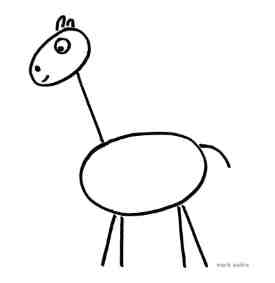 In the wild a giraffe has special markings so it cannot be seen by lions.  The camouflage blends with the colour of the trees and leaves, and the shadows.

It is a very clever disguise which took millions of years of evolution to develop.

We have five minutes and a couple of felt tip pens or crayons.

Draw some blotchy scribbles of variable colours and that will be good enough.  Don't do it too well or you will not be able to see your giraffe on the page! 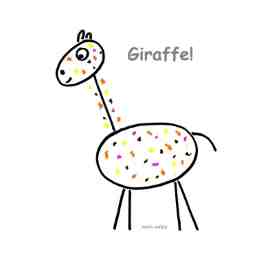 Since becoming a popular and highly regarded giraffe drawer I have started exhibiting my pictures in fashionable London art galleries.

When visitors see these drawings, many of which are nearly two inches high, they gasp with astonishment. Some have been moved to tears or violence.

I am hoping to make a sale soon because for a thousand dollars per picture I can buy a lot of hamburgers.