Here is an AZ illustrated collection of common sayings that English people use to describe dealing with money.

There is a brief comment and a picture too.  And all free of charge!

Money is a large part of life and that is why there are many proverbs relating to it.  They cover every angle from spending and splurging through to saving and frugality.  Lessons for children to learn from an early age and for adults to remember.

The comment is lighthearted and the pictures are hand drawn and original.  Some of them are available on gift product if you are lucky enough to have put some money aside for a rainy day.

And if not - it is a brief introduction to phrases that might come in handy sometime.

A Fool and His Money are Soon Parted

This expression rings very true.  In a world of advertising and special offers, con-men and thieves it is all too easy for the fool to lose all their money.

Simply entering a form on a spam email can lose the lot.

What is not explained is how come a fool got their money in the first place.  Perhaps they inherited it or got lucky.

​The point of this expression is to tell people to be sensible with their money.  Take care of it and be wary of others who may be after what you have. 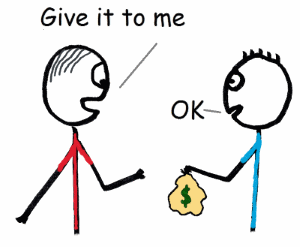 Another Day - Another Dollar

This popular expression is uttered by the work-weary as they toil in their offices.  With a great deal of sighing we will say to each other "Another day another dollar" and they will sadly agree.

Most people earn far more than a dollar a day.  It may have been true once in the West but with minimum wages approaching ten dollars or more per hour the expression could be upgraded.

But then it would lose its impact.  Despite its shortcomings the dollar still represents all manner of things including what is left of the American Dream.

If only we could live on a dollar. 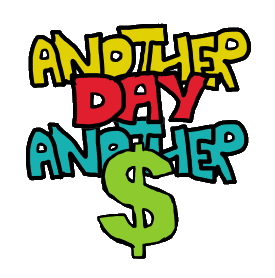 Another Day Another Dollar Gifts >>

A Penny Saved is a Penny Earned

A penny saved is as good as earning a penny.  It means that you have put a penny to one side and it is yours, waiting for the day you might need it.

That penny or any money put to one side is as good as earning and spending a penny.  Because that day to day living money is soon gone.

Sadly some countries don't have pennies or cents any longer as it costs too much to mint them.

In For A Penny, In For A Pound

If you are going to do part of something you might as well do the whole thing.

Having decided to put one pennies worth of commitment to a task - go the whole hog and give a pounds worth.

More pennies!  Sorry about that. This expression means to pay attention to even the smallest expenditure.  The daily coffee or newspaper.  The small packet of sweets.  Anything that appears to cost very little but adds up over the year.

​If you are serious about saving then small daily amounts of money can make a big difference.  Each penny will mount up and eventually you have real pounds saved.

If something costs one penny a day then over a year that equals three hundred and sixty five pennies.  Not a complicated sum to do - it is all about taking better care of your money.

This expression means there is no such thing as free money.

Typically used in response to demands for money by saying "It doesn't grow on trees you know".

If there was a tree that grew money it would be called the Money Tree.  Garden centres would sell them for five pounds or even more.  Rich people would own orchards full of them and local tearaways would try to steal fresh money leaves at night.

Sadly there is no such thing as a money tree.  For most people money is a precious and scarce commodity. 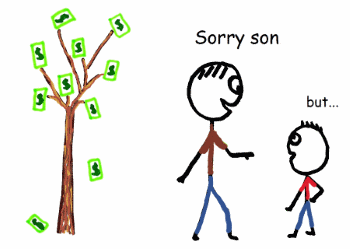 Money Makes the World Go Round

Sadly our world is built on money.  The exchange of money for services and goods, the taxation on the back of that, the social care and political projects it funds.

The old way of bartering services for goods was too inefficient for a joined up global world.  We need instant transfer of electronic funds through financial networks.  Never before have we been so dependent on the commercial system.

Money greases the wheels of everything.  It truly does make the world go round.

Neither a Borrower Nor a Lender Be

This means that you are better off in financial isolation.  Keep your money to yourself and do not lend it.  If you want money then work for it and don't borrow it.

That way you have no concerns about either paying back loans or chasing people who owe you money.

Not a very snappy expression but everyone can see the truth of it.  It was first quoted by William Shakespeare which has made this site a lot more highbrow than it was.

Apart from financial concerns about borrowing and lending there are other equally important aspects.  A money deal such as loans needs to be kept entirely businesslike and away from social or familial relationships.  Otherwise it can become a source of irritation and doubt.

A nest egg means some savings tucked away for a future someday.  A precious thing to be used only when required.

Usually references longer-term savings for a pension or other serious investment.

Some people claim that pennies found are a sign from Angels.  They really are pennies from up above.  If that was the case we would need protective headgear because Heaven is a long way up and those pennies could cause considerable cranial damage.

It is equally possible that someone has a hole in their trouser pocket and dropped a coin on the ground.  They didn't bother picking it up because the bill from the osteopath will be a lot more than a penny.

​If these coins really were from Heaven they could be a bit more generous in my opinion.  How about a few dollars?  That would be nice.

Pennies can come from other places too like busking or writing on the internet. 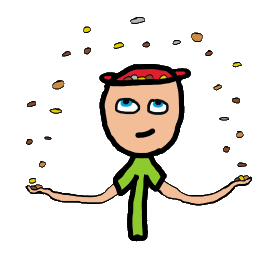 This expression is for people who carefully count their pennies and then blow pounds on careless extravagance.  Like most of these sayings it is a little irritating when someone says it to you.

How many people count their pennies anyway?  They end up in a jar or on the floor of the car.  If you save them they make a hole in your trousers.

Old people do save their pennies and slowly count them out at the checkout.  This is done to annoy young people who wonder why the old person can't just use a credit card.

See a Penny - Pick it Up

See a penny pick it up and all day long you'll have good luck.  It doesn't really rhyme properly but no matter - it is close enough.

Some people do pick up pennies from the streets.  They don't make a living from it but no one should just throw away their change.  At the very least it could go in a charity collection.

​​I suppose the expression, like many of these, is designed to make us value money. 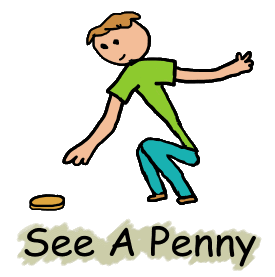 Old English expression for going to the toilet.

Relates to the charge for using a public convenience which was one English penny.  Hence spend a penny.

The expression "throwing good money after bad" means to keep spending money on something even though the original money has already disappeared.

A good example is where someone becomes desperate to recoup their losses.  Perhaps investing where people risk their money on sure-fire bets like the stock market.  It is possible to keep on throwing money away in the hope that one day the stock price will recover.

Like interest in a bank, this page will grow more expressions.  There are hundreds to choose from - this page has a taste of a few.

In between drawing new illustrations and writing a few words to go with them - I should take more care with my own money.

That is not a bad lesson to take away.
More Sayings >>