Musical Instruments From A to Z

Music provides a soundtrack to our lives.  A way of relaxing and often remembering key moments from the past.  For those who play it can be a life-long pursuit to enjoy discovering the instrument and your own abilities and limitations.

Music - either listening to it or playing it - is one of the truly great things about being a human.  A pleasurable experience that need cost nothing after the initial purchase of music or instruments.  If you ever feel bored there is an instrument to pick up, new techniques or songs to learn, or simply play again the pieces you previously learned.

Some people aim to achieve concert level.  Others play for relaxation.  Some join a band.  Music can be a solitary or a social experience.  Jazz, classical, rock, blues - the choice is endless.

Is there a better way to spend free time than strumming a guitar or tinkling the piano?  An absorbing, creative and harmless way to engage your brain.

Here is an illustrated A-Z list of musical instruments and musicians because I like drawing, lists and music.  If you already play an instrument you may spot yours or see another one that looks fun to try.

See the film Pitch Perfect for a fun story about collegiate competitive a cappella singing groups. 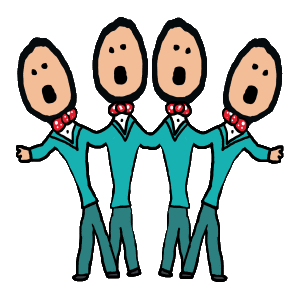 The accordion is a fiendishly complicated looking piece of equipment.

Sometimes called a squeezebox it requires a lot more than just squeezing to create a good sound.

​A pair of bellows in the middle blow air through reeds and the keys play a melody or chords. 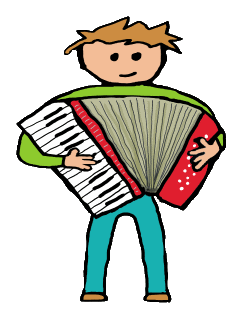 Often features in backwoods scary movies about spoilt teenagers renting shacks in the middle of nowhere.

One of those instruments that you can hear playing whenever you think about it. 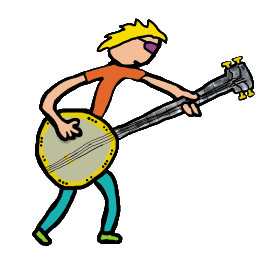 The main times a bugle seems to be played is in the Forces.  This is either to wake everybody up or when they lay someone to rest.

It is a simple instrument where the sound is made from the shape of the lips and the force of the blow.  The Last Post is a fine example of music reaching deep into our souls and minds.

How can the first notes of the Last Post send shivers down the spine and bring moisture to the eyes?

​That is the power of associating memories and meaning with music. 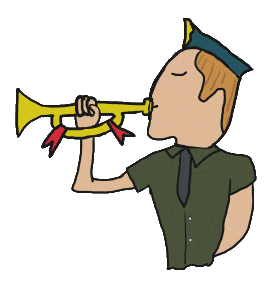 Is there any more spontaneous and wonderful sound than walking down the street and hearing live music played by amateurs?  Hearing the sound of a saxophone, violin, voice or any instrument drifting through the halls of the subway or tube is an immediate lift to the day.

​Thanks are due to all buskers for getting out and being there for all of us.  Plus a little spare change too.

With the ever advancing cashless society there needs to be a different way to reward street entertainers.  Maybe you can wave your phone in a busker's direction and send credits that way.   Like many 'advances' the transaction loses something in the process. 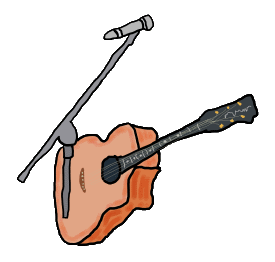 A conductor is the head guy of the orchestra.

​Organising practice sessions and conducting the performance - he controls many musicians with a small non-lethal baton and a wave of his hands.

A conductor is expected to be flamboyant and outgoing in personality and with an iron grasp of the sometimes unruly mob of musicians.

African style percussion creating an additional part of the rhythm.  A fairly pleasing sound and less ear troubling than rock style drums.  At beginner level these are simple to play too.

There are African percussion groups where you can take along a drum for the evening.  Sit with others and get into some shared rhythmic beats.

​See the bands Santana and Osibisa for some conga beats. 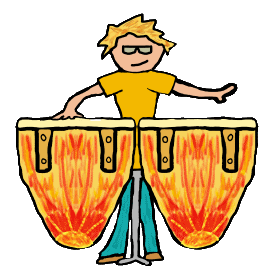 Drums are a fun piece of musical equipment.  Officially a percussion instrument they hold the beat in a band.

Easy to make the noise by bashing a drum with sticks.

As with all things in life and music - drums can start simple and become ever more complex and skillful. 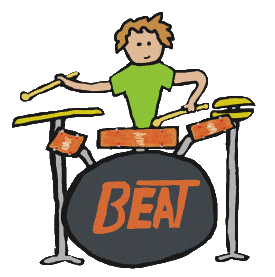 A flute player is called a flautist.  The flute is one of those mythical instruments - think of Pan playing in forests.

Ian Anderson of the band Jethro Tull showed how cool the flute could be in rock music.

​Cockney rhyming slang for suit is whistle and flute. 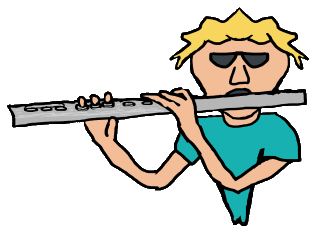 Glastonbury is one of the largest music festivals, held in the UK most years.  It started in the seventies as a free rock festival where hippies would turn up in a farmer's field and listen to bands performing on the iconic pyramid stage.  It was less iconic back then - more a construction of scaffolding poles and plastic sheeting.

Since then it has grown,  commercialised and become a middle class pilgrimage for the affluent and their children.

The key to Glasto's success was probably purchasing a decent fence with security and keeping the free-loaders out.  Now it makes money and survives - year after year.

There are many types of guitarist.  Classical, flamenco and other acoustic pluckers making beautiful sounds.

Or you could take a 100 watt amplifier and turn it up.  Add a little reverb and distortion to make it ugly.  Plug the electric guitar in and feel the instrument come alive.

There is a huge feeling of achievement when you make those first proper sounds followed by years of effort and frustration as you try to progress. 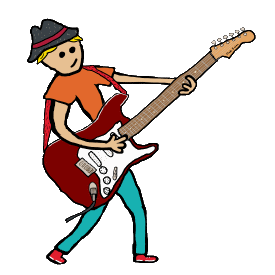 Looks like a piano on its side with all the covers removed leaving just the strings.  Played by harpist who sits at one end and plucks the strings.

There is a Marx Brothers scene where Harpo takes a piano apart to remove the harp bit and then does some playing.  Also famous as part of the Guiness logo and a symbol of Ireland.

Let's not keep harping on about it.

An often drunken entertainment - like all the best music - karaoke is performed in bars at social functions.

Performers take it in turns to get up on stage and sing the scrolling displayed words of popular tracks to a canned backing accompaniment. 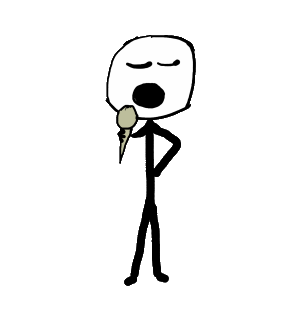 Electronic keyboards are generally easier to get a decent sound from than a traditional piano or organ.  With a range of sounds, backing rhythms and effects on offer, they are a good instrument to gain a pass to the world of musicianship.

The entry level cost for keyboards is low.  As you move into pressure sensitive, multi note instruments the price rises but is still reasonable when compared to the costs of purchasing and maintaining a real piano or organ. 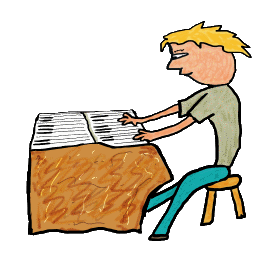 What do you call someone who doesn't like the oboe?

Joking apart and yes, it was a joke - the oboe is a large complicated looking woodwind instrument.

​It makes quite a loud noise so don't be fooled into thinking it is some gentle flute like creation.

​An oboe player is called an oboist. 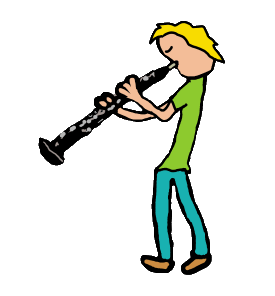 The piano is arguably the best all-round instrument to play.   The notes are laid out in front of you.  There is no need to make the sound by bowing a string or blowing in a certain way.

It is logical with a structure and scales.  It can be used for all types of music from playing a sing along at home, classic prog-rock and concert hall pianists.

In theory the piano is an instrument that you can learn without too much effort.  There are a huge number of YouTube videos explaining how to play favourite songs offering endless possibilities for learning and pleasure. The saxophone is a wind instrument with attitude.

It is extremely complicated in terms of the number of twiddly bits to learn and then there is the correct way of blowing into it.

The sax is no kazoo.

​The saxophone is an instrument ideally suited to posing on stage.

​Banned in the UK because " No sax please - we're British". 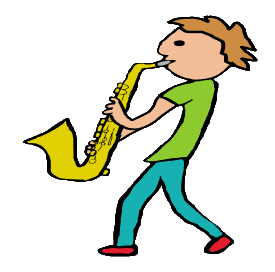 It is tricky to draw singing so the picture is a selection of microphone techniques.

Many singers, especially of the posing variety, need to create and own their particular way of holding the microphone.

With or without the mic stand.  Stretching up to it, or down to it or holding it away or close. 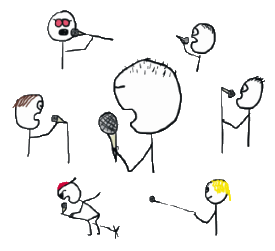 Here is a colourful string quartet playing a recital.

​The four instruments are two violins, a viola and a cello - that's the big one.

​In the right hands with skill and practice this can be a beautiful sound. 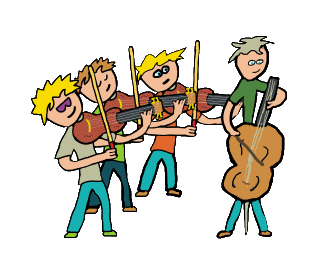 The triangle is one of the first instruments we might learn to play at school.  Part of the percussion family.  It requires the ability to hold the triangle and hit it - WHEN INSTRUCTED - at the right time.

It does not mean bashing it repeatedly and randomly.

A beautiful passage of music and singing followed by a perfectly timed "ting".  That is what years of training and total concentration can achieve.

The triangle is an ideal musical instrument for a child who needs to take a break from playing the recorder.  You can sometimes have too much music in my opinion. 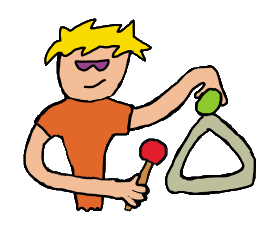 The ukulele is an often unfairly mocked instrument - played for self-effacing fun by masters such as George Formby.

There will be a uke graphic at some point but this section exists purely to have a link to The Good, The Bad and The Ugly played by the Ukulele Orchestra of Great Britain.  Eccentric and brilliant at the same time. 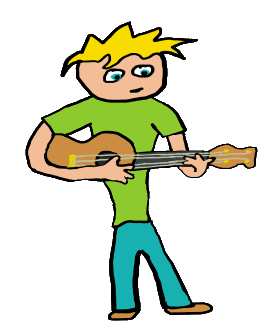 In the wrong hands a violin can be an instrument of torture.  Take school recitals for eight year old beginners as an example.

The violin is of course a beautiful instrument both in construction and sound.  It is the mainstay of classical music and the backdrop to so many film scores, adverts and even the occasional pop song.

The violin is also used in folk music, jazz, blues and rock and can be known as a fiddle. 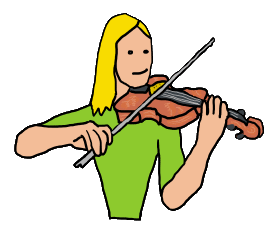 The great thing about xylophone - apart from it being a cool instrument in the musical percussion family - is that it is one of the few words beginning with "X".

​For Scrabble, quizzes and general wordplay - xylophone comes in handy time after time.

One of the instruments where the sound is provided for you.  No blowing or stringing required - just hit the thing. 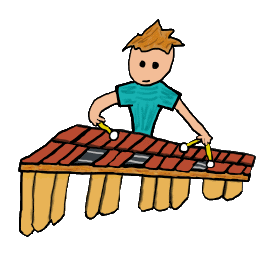 Youtube isn't an instrument.  It is a brilliant free shared resource of musicians of all instruments playing, teaching and showing off their skills.

For the guitarist struggling to master the music to a particular rock song or the pianist wondering how the blues should be played - or anything else imaginable - Youtube has a superb selection of videos to watch and people to follow.

The rest of the band hasn't got here yet.  There might be a full stick figure orchestra one day.  That would be quite something.

Making music is one of the wonderful things that humans can achieve - it takes us away from the humdrum of ordinary life into a different place.  Hope you enjoyed these efforts.
More Hobbies >>