I don't know much about sailing on the high seas but there are many nautical terms that have entered the common language.  We use them in normal conversation without really stopping to think about them.

It is fun to learn these expressions for use in dull office meetings and sometimes interesting to understand the real meaning behind them.

With a  little light-hearted comment let us start a voyage across an ocean of sailing proverbs and expressions.  There may be storms ahead and Sirens calling us to the rocks but we will arrive safely in port with many a tall tale to tell.

Any Port In a Storm

The saying "any port in a storm" means that if you are in trouble you will take refuge where you can find it.  It may not be the best place to be or the most attractive offer but a ship in a storm needs a safe harbour.

We can accept the adage as meaning to stop looking for the perfect place otherwise an opportunity for rescue may be lost.
If a storm threatens find the nearest safe place and shelter.

Between the Devil and the Deep Blue Sea

For when life gives you tough decisions.  This expression means that the choices available are not appealing ones.  On the one hand you have the Devil and on the other the Deep Blue Sea.

A more modern way of saying this is "Between a Rock and Hard Place".  Shorter still is the saying "Between Two Stones".

These expressions all mean you have little choice of not very good options.

Another choosing expression where you only have one option is "Hobson's Choice".  Hobson was an Englishman who hired out horses.  He told customers they could have a particular one or no horse at all!  "Take it or leave it" is another way of putting it. 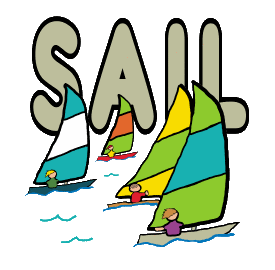 An expression of surprise or bewilderment.  "That cat just jumped onto the roof" - "Well blow me down".  Dates back to a time when the "F" bomb was far less popular and people had more inventive ways of expressing themselves.  Even sailors.

Presumably the origin lies in the ability of a strong wind blowing someone over or down.

This fearsome creature was often found on sailing ships.  If a sailor misbehaved the Captain of the ship would send for the cat o'nine tails.  "Let the cat out" he would say "And we'll teach that Jolly Jack Tar a lesson".

The naughty sailor would be punished with the cat.  Then it would go back in its cabin and eat a nice juicy haddock as a reward.

Not to be confused with the Ships' Cat which was specially trained to catch mice and large weevils.

The crows nest is the highest point on the ships main mast where a lookout could be kept.  A young fit sailor would be commanded to climb the rigging up to this point.

No safety net or harness in those days.  A long climb on a ship in high seas swaying to and fro.

Actual crows build their nests high at the tops of trees.  Hence the expression.

Don't Spoil the Ship for a Ha'porth of Tar

A ha'porth means a half-penny which was a small amount of money even back in the old days.  Oh sure, you could buy a house for a penny and drink beer every night of the year for two pence - but it was still regarded as a small sum.

Tar is the last thing they add when building a boat.  All the wooden planks are nailed together, sails added, decks, cabins and keel - and the wonderful ship is almost ready.  Just the tar to be painted on.

It is a cheap but essential part of making a ship seaworthy.

​Presumably someone once thought they would save a half-penny and scrimp on the tar.  The ship would leak water and the cost in repairs or even lives would far outweigh any original saving.

Now it means beware of false economies that may end up costing you money.

As in "They have gone overboard with that idea".  Often used in office cliché speak to describe a colleague who has got carried away with something, taken a scheme too far.

It is a fairly effective and quick way to illustrate how leaping in without a safety net - too many metaphors here sorry - can lead to a sinking feeling.

I See No Ships

In 1801 at the Battle of Copenhagen - Admiral Nelson disobeyed an order to disengage with the enemy.  He put a telescope to his blind eye and said "I see no ships".  Heroism, foolhardiness, courage encapsulated by a single simple act.

King Canute - also known as Cnut the Great.  Famously known as a foolish man who tried to stop the waves although he was apparently a wise leader in real life.  Rewriting history and fake news is not a new phenomenon.

A moral compass is an idea of representing which direction the correct choice is.  Instead of North, South, East and West the compass would point to the right decision.

It is a neat way for politicians to pretend they care about the choices they make.

God of the sea in Roman religion - the equivalent to Poseidon in Greek mythology.  Usually portrayed with a trident which is a fearsome looking three pronged spear used for fishing.

Pieces of Eight were the coins the Spanish galleons used to carry before bit-coins became popular.

Pirates would steal the treasure and bury it on a deserted island.  They would leave no clues except for a detailed map to be discovered by kids owned by Spielberg or Disney.

Armed only with their arms these photogenic children would foolishly attempt to locate the treasure, deal with the pirates and hope to make a decent living from subsequent merchandise rights.

Nowadays pirates make their money providing dodgy downloads of films through the internet or hacking into bitcoin accounts.

A pirate is one of those 'glamorous' crime characters.  We admire the swashbuckling devil-may-care attitude of the risk-taking pirate and gloss over the harm they did and still do to innocent civilians and commercial enterprises.

Disney and Lego make money from franchising the Pirate trade.  Although woe betide the person who attempts to copy their expensive merchandise.

Piracy is alive and well off the coasts of Africa.  Small boats intercept huge tankers and hold them to ransom.

Other piracy involves copyright theft on the internet - stealing films and sports outlets and making them available for free or low cost. 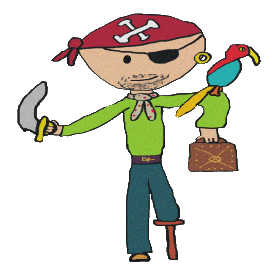 Mobile phone for pirates - the aye-aye phone.
Buy yachts when the sail is on.
Favorite spread - Anchor butter.
Misbehaving sailor sits on the nautical step.

​The two best days in a boat owners life.  The day he buys it and the day he sells it.

An expression of surprise or shock.  Much loved in literary works where the stereotypical pirate will utter it as an acceptable child-friendly expletive.

Probably to do with the timbers of a sailing ship being hit or crashed into by large waves, rocks or cannon fire.  The timbers would shake and shiver.

The expression now means idleness or working in a lazy manner.  Originally it described a sailor at the front of the ship physically swinging a piece of lead on a rope to test where the bottom was.

On September 19th of every year since 1995 is an official talk like a pirate day.  A fun parodic example of those other arguably more important days such as save the whales or whatever - the pirate day makes this page even more useful.

What lookouts on whaling ships would utter when a whale spout was spotted.

​Most whaling is now done by Japanese 'scientific' research ships so they probably have their own expression.

That Ship Has Sailed

This seems to be a popular expression at the moment.  It must be now that I am aware of it.

Since when did ships sail anywhere?

Maybe it was first used back when the clipper ships sailed across the world.  Eventually someone was bound to miss their journey.

​As they stood there on the dock-side one of those annoying people who always state the obvious would say "That ship has sailed".

See also "missed the boat" which is more to the point.

Three Sheets to the Wind

When a sailor has had too much to drink.

There are tales of sailors being frightened to see an albatross because it was supposed to be unlucky.

If you have ever spent a long time doing anything - perhaps at a boring office meeting for an hour - you can imagine how the sailors got after months away from land.

The only thing they would see would be bread filled with weevils - and the sun and salt water would make them feel unsteady and a bit trippy.  Then a giant bird flies into view and of course they are going to freak out.

Up the Creek Without a Paddle

When luck has run out or you are in a bit of a sticky situation.  It is a beautifully visual expression.  We all know what a creek is - a small watercourse possibly with crocodiles or other difficult wildlife.  Maybe there are rapids beneath it.  It is probably miles from civilisation.

The fact you might need a paddle implies you are in a small craft - a canoe or a dinghy perhaps.  And you have no paddle.

This is not a good place to be.

Our punishment systems have improved since this basic, if effective, method from the old sailing days.  "Walking the plank" means to walk off the ship into the ocean - never to return.

There may have been some small chance of surviving, perhaps swimming to the nearest land or clutching to something and hoping to be rescued.

The plank was a piece of wood for the unlucky sailor to walk out on, probably with cutlasses prodding him to make sure he kept moving.  Most passenger cruise ships have now stopped this method of punishment and will simply apply a surcharge to your credit card if you break their rules or china.

Anchors are heavy.  You can tell that without needing to weigh them.  The point is to keep the sailing craft in a fixed position when there is no dry land to tie up to.

Weigh anchor means to raise the anchor in order that the ship can set sail.

It looks like this Captain needs to return to his cabin for some rum and a game of pass the weevil with the first mate.  Time to weigh anchor and full steam ahead to new territories.

With the compass pointing North and the sextant doing whatever a sextant does we should make a fair passage.

It is time to stow the biscuits and shiver our timbers...

There will be more sailing expressions in due course and meanwhile there is plenty more reading material on this site as we head out to sea.
More Sayings >>