Making Pictures Out of Words

I started creating my word pictures a while back and was lost for a way of describing them.  The idea is to play with the letters in a word so that they become a picture of the subject while still retaining the essential characters within the word itself.

When I search for word pictures they seem to be anything but.  There are a few where artists have used many appropriate words to build a picture.   Portraits and a bicycle are the ones that stick in my mind.

There are those that are a selection of words in different colours and font sizes – like a cloud search from a web site.  Sometimes they form a simple image like a heart or a pair of hands.  There is a Shakespeare one of those towards the bottom of this page.

There are the ASCII art images formed from simple keyboard characters.  Here is a simple early smiley…

This page is about the type I do.  One day I might find out the correct name for it.

If you are a part-time artist or enjoy puzzles - creating an image from words is a relaxing way to pass the time.  It also has useful possibilities for designing company logos. Some of those can be very inventive indeed.

This page contains my best efforts.

In this first picture the "Ship" word is floating on the sea.  It doesn't look much like a ship despite the clumsy addition of a seagull which was meant to be the dot above the i.

A Picture Paints a Thousand Words

That is what they say.  If you read artists and critics explaining what a picture means you might think a thousand words is nowhere near enough.

But what about word pictures?  How would that work?  "Those words are worth a thousand pictures".  That does not make sense.

Of course we know what they mean.

Instead of using a thousand words to describe a scene - a picture will sometimes do the job.  In the cartoon it is not clear that the artist fully grasped the idea behind the expression. 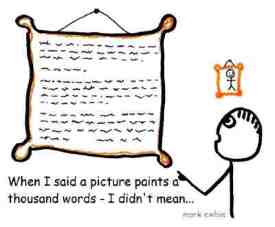 This simple tree design uses the letters to form the object.

The "T" is used as the top of the tree.  The green leaves or canopy uses the spread of the letter.

The remaining letters underneath are coloured brown to give the impression of the tree trunk.

This design and the others create a pleasing simple brain puzzle to both view and read the picture.  The idea being to create a piece of bright easy fun for the viewer. 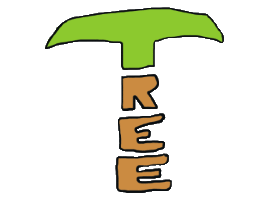 Animal Made from Words

When I drew "Snail", which was the first of these types of drawing, it was a little exciting.  I had the idea of creating a whole book of these images until it became apparent how tricky it was to think of them.

"Snail" works for me because the letters really start to replace what would be drawn with lines.

One practical benefit would be that if people could not make out what the picture was they could read it instead.  Or it could replace traditional English lessons with a more visual angle on the "B is for ball" type of learning.

I liked "Snail" so much that it sent me off in this direction for a while. Then I realised it was a lot harder to do than it seemed at first. 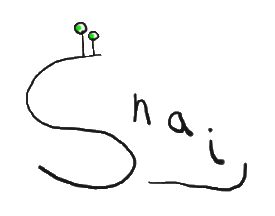 The bees in the picture are formed from the letters in "bee".  "B" for the face, a downwards "E" for the body and an upturned "E" for the wings.

It is not particularly clever but is in my opinion an attractive and fun image. 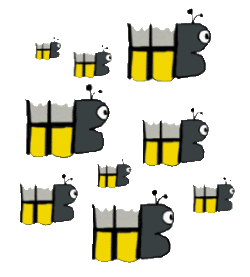 Here is a Lowry stick figure made up of the words Art, stick and Lowry.

The original design was pleasing and it was fun playing with the word creation package.

These are probably the pictures you expected to see.  Where the shape is filled with the words forming a visual tag cloud.

Playing with software at a free web site called TAGXEDO - I took an old portrait of Shakespeare and altered it as you can see below.  This is quite a lot of fun after the usual process of learning and frustration.

So THAT is how people have been creating tag cloud pictures.

​I created those word pictures by drawing a black and white pic of Shakespeare.  Used it as a shape in TAGXEDO and entered the words "As you like it" and "Shakespeare".  Not very original but this was an experiment.

Is it art?  Not too sure about that, but it is fun to do.  And maybe, given the right words, shape and idea, there is an image that would grace mugs and t-shirts for product sales. 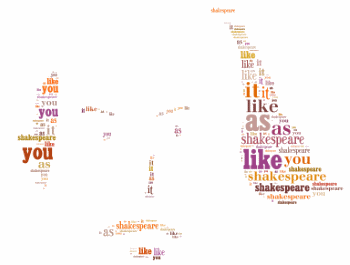 The idea of drawing a shark from the letters came to me as I was driving around.  It was the letter "A" in the middle of the shark word - the top part of which is perfect for the recognisable fin of the shark.

After some time idly doodling and thinking about it I produced a picture.  And then another, and another.  So that's why Monet painted water lilies for twenty years.

Shark is one of the best word doodles on here.  It has form and humour, plus you can read what it says.

A common way for the line between Word and Image to be blurred is in logo design.  I like looking at the endless inventiveness of graphic artists on the sides of lorries when out driving.  It makes a long drive less boring.

​Taking that idea it is possible to have a lot of fun with words.  Here is an Easter card design where the "T" becomes a cross. 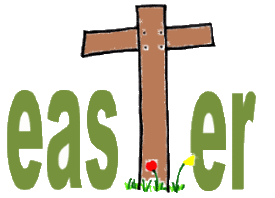 This Drone Pilot image was fun to play with.

​Use the words as a base part of the final image with a little extra graphic detail to make a picture.

The Drone flies - the Pilot is on the ground. 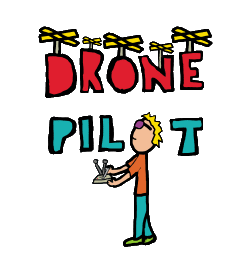 In this design the letters in the word "Guitar" form the instrument.

The body is the "G" shape and the remaining letters go up the neck.

​Add shading, pick ups, controls and strings and it creates a fun and different image for guitar heroes. 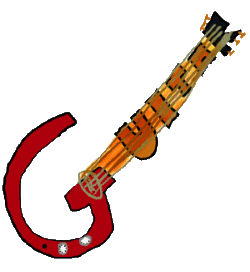 Pandemic Panic isn't really a picture at all.

Just some highlighted letters from the Pandemic word that spell Panic.

The famous quote from the Matrix film uses the obvious words and an obvious pill-shaped "i" to create the graphic.

A message in two short words for those who like these things.

The game of snooker conjures up a few mental images - some of which are included in the design below.
​
This is a simple design which is neither clever or particularly fussy and is hopefully bright, fun and obvious.

I hope you enjoyed this collection of design ideas and thoughts.  They are a fun mental challenge to think about and doodle.

Take some time to really notice the logos that grace our world - lorries, commercials, graffiti, Banksy and so on - and admire the inventiveness and fun of the designs.  Someone worked hard at that!

​Thanks for visiting.
More Art >>