Here is a collection of Rasta stick figures with a few tips on how to draw them and some thoughts on the subject.

The strength and symbolism of the Rasta red, gold, green and black make it one of the stand out graphic designs.  Simple to draw and with a powerful message for those who don't buy into war, politics and corporate greed.

​There is another way for people.  The Rasta way!

I searched for the meaning of the colours.

​The Ethiopian flag is green, gold and red.  The black comes from the red, black and green used to represent Africa by the Marcus Garvey movement.

There is a lot of history, emotion and feeling represented within the colours and the Rastafarian movement.  This is a drawing rather than a history page so that is as in-depth as it will get. ​

​Let's do some drawing.

You are going to need to get the coloured pens out to draw a Rastafarian stick man.

For a start there is the hat.  The more colourful and outrageous the hat - the better.  Those colours are the key easy drawing difference between a Rastafarian image and one that is not.

In the picture our normal straight stick figure meets his Rasta friends.  His khaki shirt and brown shoes seem a little dull by comparison. 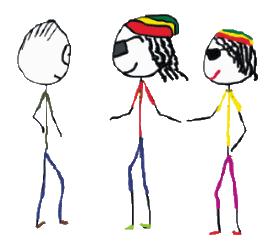 In the Rasta Smile picture I drew the main elements that say Rasta to me.

The smile, dreads and the hat with stylised leaf logo.

It is about fun, sunshine, reggae and freedom in my opinion.

There is a lot of stuff about the religious side of things in Wiki but I nearly passed out before getting to the end of it.

​And I wasn't holding my breath either.

The logo on the hat could be a leaf, upside down spider or anything.  There is no need to make grand design statements about that part of Rasta because not everyone agrees with it, kids don't need to know and it is no big deal anyway. 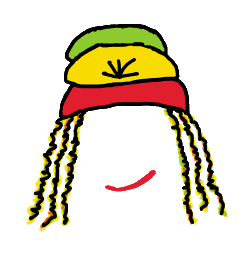 There are many people who have to hold down boring jobs in soulless offices - perhaps wearing a suit and tie.  Not all of them are entirely straight.

Some are part time Rastas who breathe a sigh of relief when they escape the daily grind and can switch off.

Get rid of the suit, play some music and enjoy some chill time with friends.

That does not harm anyone.

​In the picture the businessman is wearing a Rasta colour tie.  It is his way of rebelling.  "I am an individual" he says and straight people ask him whether it is his old school tie.

​That would be one very cool school. 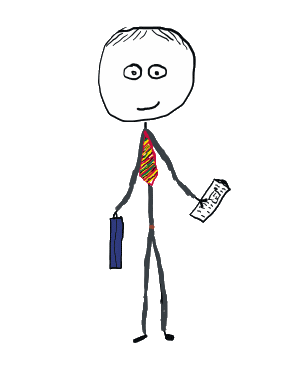 A Word About Herb

The governments of the world have been involved in a stupid battle against herb for fifty years.

During that time they have created criminals out of millions of people and locked up many of those for tens of years.

Politicians do this because they lack the honesty to admit what everyone knows - herb is less harmful than tobacco or alcohol.

Those big corporations pay tax and own politicians.  Between them they fund the so-called war on drugs which supports police and criminals.

​Here are four relaxed Jamaicans on a bob-sleigh.

​Much better than anything politicians ever do. 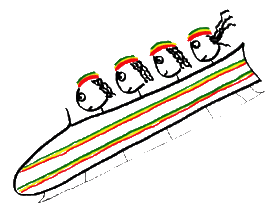 This lady was suggested as a drawing idea by a Jamaican friend.  It seemed like a very good idea to me.  In fact it may have been the first Rasta picture I tried doing.

The essential thing is to be happy.  If you can do that with the "Be Happy" song in your head at the same time that is a big advantage.

I don't have any knowledge of the history of the movement but there are a couple of key issues that appeal to me.  And no, I don't mean the obvious one OR the hat.

It is the rejection of materialism and oppression.  They seem like pretty fine ideals.  The idea of quitting the rat race, giving up on voting and generally opting out holds a lot of appeal.

​Rasta stick woman has the hat, dreads and smile and is holding a large cone-shaped scented cigarette rolled out of Rasta colour skins. 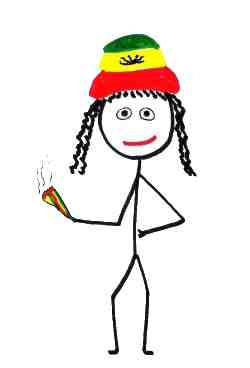 Having Fun With Rasta Colours

The Union Jack in Rasta colours was a fun image to create.

​There must be many designs that can be subverted by recolouring in the red, gold, green and black.

Instead of the Union Jack symbolising the glorious past of the all-conquering Great Britain - it can be turned into a peaceful and inclusive symbol of a more chilled out country.

Rasta UK Gifts >>
Simply by altering some colours using paint.net a new message can be sent to those who might listen.

I also did a Rasta Stars and Stripes which looks pretty cool.

Rasta USA Gifts >>
And a Rasta CND symbol which combines some peaceful messages in a nice looking logo.

Here is a fun... and obvious idea.  A rainbow in black, red, gold and green.  I wanted to hand draw it rather than use exact measurements so it looks a bit wonky.

I think that is good rather than a mistake.  The point is that a Rasta rainbow would be a little more random than its more strait-laced cousin the traditional rainbow.

Here is a picture where I have used tagxedo to replace the colours with words.

I think it looks quite effective although the more drawing and computer work I do - the less able I am to judge the result.

To create this effect I drew my simple Rasta face and hat in the appropriate colours.  Uploaded it to the site and used their tool to manipulate the lines into words.

​Does that image work?  To be straight with you I have no idea.

Perhaps there is a message there for anyone who enjoys drawing, art and playing around.  Just do what you want to do and try to have fun with it.

Too much worrying can make the fun go away.  So there he is.  Rasta word picture. 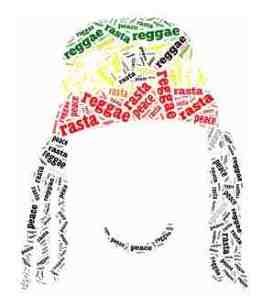 An emoji is a simple image designed to convey emotions.  This Rasta guy is full of emotions.  Many of them are under his hat as indeed is he.

He could also be a smiley but whatever it is he is fairly happy and relaxed.

The stereotype visual clues are there as usual - dreads, hat and spliff.

​Note also the relaxed gait as he ambles along with hand in pocket.

The hat is almost as big as the Rasta so that is a major plus point. 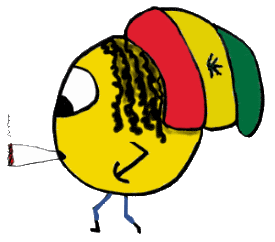 Here is another fun take on the Rasta Emoji idea.

No spliff this time around to make him more child friendly, a simple hat and subtle CND logo in Rasta colours on the sunglasses.

​Plus a nice big smile for my smiley of course. 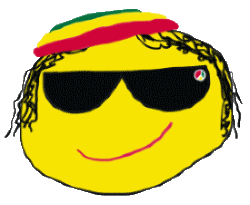 Picture of a Rasta Dog

There are a number of dog breeds with coats that look like they have dreads. All of them have the right attitude which is essentially sleep most of the time and enjoy your food.

They should be called Rasta-doodles.  If you know anything about mixed dog breeds like labrador and poodle equals a labradoodle that makes a good pun.

If you don't know much about them it is not so good.

​​Rasta dog has the hat, some very fine flared trouser legs and is wearing dreads. 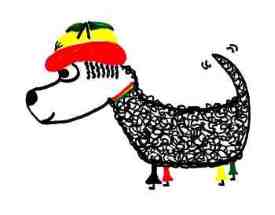 There may be a connection between a big woolly Rasta hat and keeping your dreads or other things under there.  That may be a myth.  One thing for sure is there are a lot of way out there Rasta hat designs.

There are a few in the hat picture.  The rule seems to be there is no particular rule - apart from the colours of course.

Instead of Ascot racecourse having a Ladies Day - where they all turn up in silly over priced hats - they should have an Ascot Rasta Day.

​The horses could have a wander round the track if they wanted with a nice sit down half way along. 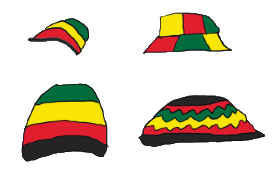 I was thinking what a Rasta ghost would look like and how he would appear to a Rasta.  It seemed to make sense that he might materialise out of the smoke.  That was the first part of the idea to which I added the usual hat and dreads.

Well, what else can you put on a Rasta ghost?

Fortunately he is a friendly ghost which is exactly what we would expect.  If you keep your eyes closed long enough you might see one too.

This is a bit like Genie of the Lamp except in this case we can call it Spirit of the Spliff. 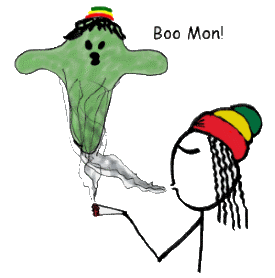 There are some great puns out there.

​Here is mine.  Available on tees, etc. 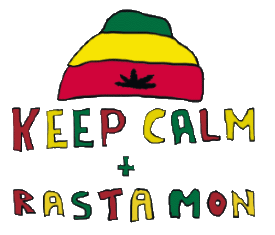 Here is a play on words - using the Rasta Mon expression for a Mother's Day idea.

​She pushes kid in buggy along while wearing the colours, shades, hat and dreads.

​The kid has the beginnings of tiny baby dreads. 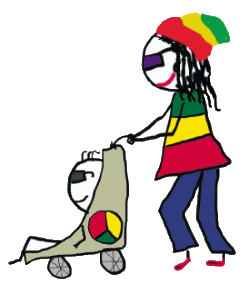 It figures that a Rasta Xmas would have a Rasta Santa to visit.

He would bring a sack full of goodies for the good children.

Now it might be that Rasta Santa would turn up a little late.  It is a long way from the North Pole or Jamaica - depending on which tale you prefer to believe.

Rest assured he will be there and Xmas will be a whole lot of fun and friendliness. 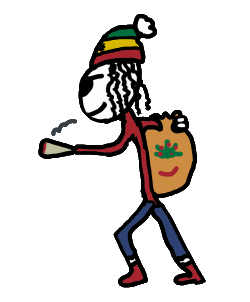 That's the end of my Rasta Drawing Page.

Drawing the guy is all about the simple direct colours of the red, gold, green and black.

Colours which would have been fun for Google to use in their logo.  Maybe next time they do a redesign.

In terms of what Rasta stands for there is the obvious leaf indulged in by young hipsters and old hippies.

​As good if not better than that is the easy to access peaceful symbolism - a world which can let people do as they want and they in turn will let others.

If you got to the bottom of this page without drifting off then congratulations. 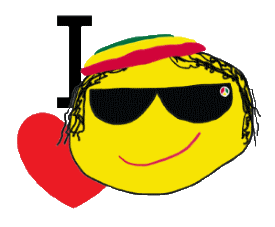