This is a part-spoof part-real page of stuff about Ancient Man.  It started as a joke page about stick men and then I accidentally got interested in it.

Stone Age people were pretty cool.  They invented, discovered, survived and a whole lot of things that Modern Man has mostly forgotten.

Could you make a flint tool or hunt a mammoth?

Gradually this page evolves - to use a fancy archaeology type word - into something that might one day have some use.

Think of it as a Stikipedia of Knowledge for really old stuff.  In vague AZ illustrated format to make it seem more important than it really is.

Recent archaeological finds in the Aztec area have unearthed what appeared to be markings from a felt-tip pen.

On closer examination by someone doing a degree they have turned out to be the first known relics of an ancient stickman or homo stickus as he may now be called.

​With just a few fragments the expert has managed to weave a tale of research that covers a time of ancient history - the Stickolithic period.  Or Jurastick period - whichever works best for you.

Add in the possibility of a government research grant for investigating the Stick Period and it must be time to get digging.

Archaeologists dig up stuff and write very long books about it.

​Sometimes they discover a bone or a pot which sends them into raptures and annoys the Creationists.

You can volunteer to go on a weekend dig and use a toothbrush to excavate a pit. 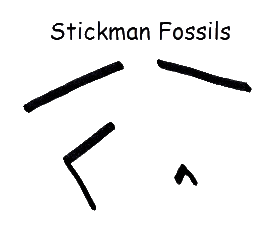 Since I started writing this fascinating piece yet more old stuff has been dug up somewhere.  This time it is an Aztec calendar featuring the months of the year and the great stick god himself.

Some archaeological types are saying the months of the year were not invented until Roman times.  Like they know anything!  How else would the Aztecs know when to plant their potatoes?

​No one knows why their god poked his tongue out.  It may be simple rudeness or an underlying asthmatic problem.

This fascinating relic will be on display at a museum once they have given it a good clean-up. 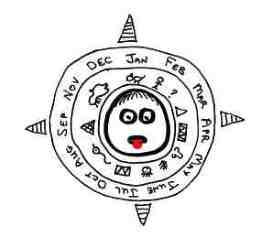 It is not clear why ancient man felt the need to make so much broken pottery.

Archaeologists are always finding it buried in ruins or just laying around in trenches.  It may be that our ancestors were simply not very good at making pottery or had a use for it that we do not yet understand.

There are some very old and badly drawn pictures in caves.  These were probably made by a stone age man or artist as he would like to have been called.

After eating there would not be much to do because this was a long time before the internet had been invented.

With nothing more than an old bone, some blood and a wall - ancient man would spend a pleasant evening drawing pictures of animals he had chased or dreamed about.

Some of those pictures are the only record we have of those long lost creatures.  It is amazing to think those drawings have lasted tens of thousands of years.

Now we tell children off for drawing on the walls and call graffiti a crime.  That is progress. 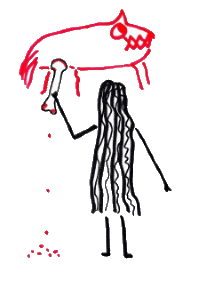 One of the cool things ancient man did was to create large chalk horses on the sides of hills.  They do this by cutting away the grass and turf to reveal the white chalk underneath.

The horse can be seen from many miles away.  Other times they created different images but the chalk horse is the best.

If you live in England - or even if you don't - go to White Horse Hill at Uffington.

​Walk up the hill and sit where people thousands of years ago also sat.  Look out at the view, admire the White Horse and share that feeling with the spirits of our ancestors. 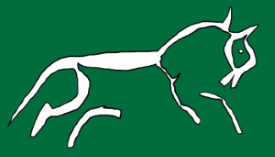 There were no decent hardware stores in Stone Age times.  If you needed a tool for something either you or the nearest flint knapping expert had to make it.

They did this by banging flints with stones, pieces of bone or horn to form into a shape that worked for them.

The idea being one side is very sharp and the rest forms a comfortable piece to hold with hand or fingers.

Flint knapping is a popular hobby among people who want to learn the skills that Ancient Man had.

It makes a connection between the chartered accountant on a weekend flint knapping course and the flint tool maker from thousands of years ago. 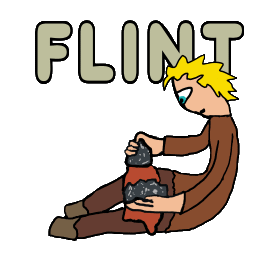 The ancient people used to bury old bones so that one day geology or paleontology would be career choices.

They buried the bones in layers - the oldest ones at the bottom and then working their way up.

​Each layer was given a name so we can have fun trying to remember them.  Jurassic, Silurian, Cretaceous and so on.

This organising and burying of bones was a good example of forward planning.

Some geologist types say that organic matter will eventually turn to stone and that is what fossils are.  They are scientists so it is best not to trust them. 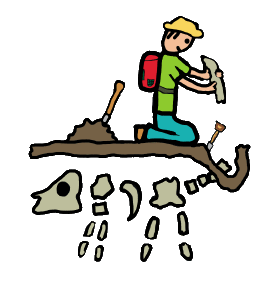 It was a perfect coincidence that saved our species.

The Ice Age threatened to make the world uninhabitable - except for hairy beasts like the mammoth.  It seems that stick man discovered how to make fire simply by trying to keep warm.

He was rubbing his hands together or spinning with one toe pointed into a wooden receptacle when all of a sudden Fire was invented.

​Sad news for the guy who discovered it of course - being burnt to a crisp.  But those watching the tragedy with much amusement realised they could use a small child or senile relative to create their own fire.

This led to a great deal of carbon being burnt and it was only a few short millennia before Global Warming made everything much nicer.

No more hairy mammoth skins.  In fact no more mammoths - sad face.  But lots of berries and more manageable sized animals came along and life was easier until the invention of the iPhone. 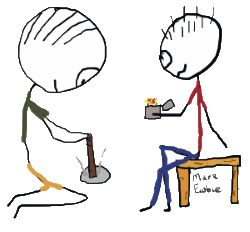 The invention of the wheel is often talked up as though it was something important.  As if developing the single biggest cause of pollution - the car - was a good thing.

Ancient man could have happily carried on walking but Progress came along.  He was sawing logs to make an attractive garden feature when a thin slice rolled off down the hill.

​That was the wheel and we never looked back.

​Unless reversing into a parking space of course. 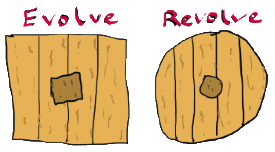 Stonehenge was not actually built by stick man.  There was no way he could carry those massive stones two hundred miles and arrange them in a circle.

It was probably made by aliens who used it for human sacrifice, like a massive barbecue.  They subsequently mated with the old stick man species and so Modern Man was created.

Sadly, the monuments that were built by our ancient ancestors were made out of wood and have long since perished.  The artists impression shows what they could have built before the aliens arrived. 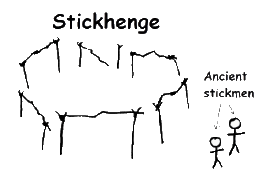 Stickhenge Gifts >>
Here is the real Stonehenge or part of it.  A genuine Wonder of the World built by our ancestors.  We don't know how or why they did it despite many theories and books available.

What we do know is that pre Technology people found a way to create something that lasted for thousands of years.  A magical place.

​Put it on your bucket list for the next Summer Solstice. 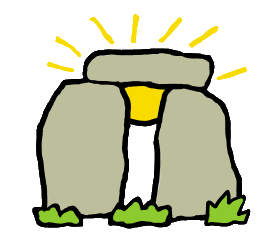 The woolly mammoth was hunted by the stick man for its meat, fur and tusks.

That is nature so get over it.  A vegetarian would not have lasted long in the frozen tundra of the last Ice Age.  It was kill or be killed.

It is quite likely that the exercise during the hunt kept the mammoth fit and active - and many of them lived to a ripe old age.

​Ancient stick man only killed what he or his wife could carry.  If they had some left over after feasting they would hold a mammoth sale. 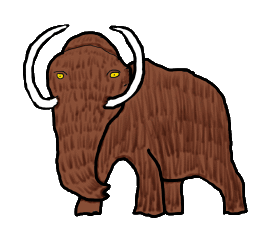 The End of Stone Age Man

​It is not clear when this change happened.  They did not leave many clues unless you count millions of years of historical remains.

Old boring stuff is important because history is part of what makes us human.  Respect for ancestors - the hard times they endured, the discoveries they made, the reason why we are here.

It is a pity that history is only written by the winners and politicians refuse to learn any or tell the truth about what little they do know.

Stone Age Man no longer has to care about any of that.  It is our turn now.
More Art >>