This is called football in the US and Canada.  The rest of the world thinks of football as meaning the no hands kick it style of soccer game which is a bit confusing.

So this small section is for the American version also known sometimes as gridiron.  It is the most popular sport in the US.

The game excitement is obvious for players and fans.  A spectacle that works as television entertainment ensuring the big money flows into the game.  It is huge in the States and trying to make inroads elsewhere.

Europe has the other type of football and it is hard to see how that difference can be overcome.  Most people can't afford the money or time to engage with both forms.

Massive game in the US, not played so much elsewhere.

In the UK they play rounders - which has a bat, ball and bases - and is an occasional family and friends summer in the park sort of game.

There are three main roles in the sport.


There are fielders too - but they are mostly waiting their turn to throw or hit. 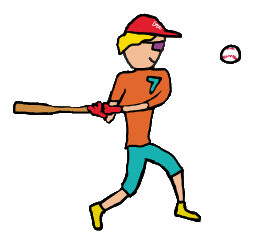 One of the world's most popular sports.  Run, dribble, pass and shoot the ball using hands - not feet.

Lots of points and energy in a game.  This sport is arguably the ultimate in entertainment.

One crowd-pleasing shot is the "slam dunk" where the ball is placed down into the basket.  A big leap, maximum pose and the money shot for the cameras.  And talking of money... the players are among the highest, if not THE highest paid in sport.

​They are also some of the tallest. 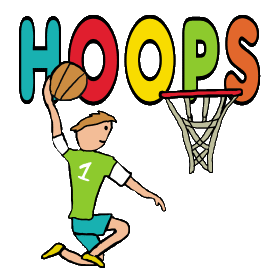 Cricket is one of my favourite sports.  Listening to Test Match Special on the BBC radio for up to five days is one of the few pleasures of being English.

The results are often less pleasurable but that is part of the experience.  The Test matches, especially the Ashes rivalry with the Aussies, are highlights of the cricket fan's sporting calendar.

Cricket is incomprehensible to those who find it boring and unfathomable.  It is our little secret - the beauty of the ebb and flow, hours or days where not much happens and moments of pure brilliance.  The tension and the banter.

With the introduction of slogfests and whackathons such as limited over and Twenty20 matches - cricket aims to capture a new audience who want quick thrills in a shorter time frame.

Test Matches are still the ultimate contest for those who enjoy cricket as it was designed to be played. 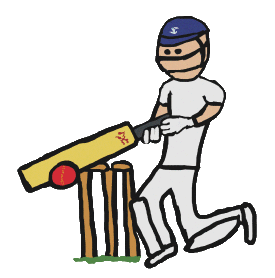 Football is a team sport played between eleven players per side on a pitch.

Or a street game where some kids kick a football around.

Or one guy playing keepie-uppie with a football.  It is flexible.

In some parts of the world it is the main game - the national sport.

In America they call it soccer but they are getting the hang of it.  Ninety minutes and maybe a goal will be scored.  It is a hard sell compared to the mega points and quick thrills that are supplied by competing sports such as basketball, baseball and American football.

​In the picture a goalkeeper is stopping another shot from the opposing forward to keep his team in the match. 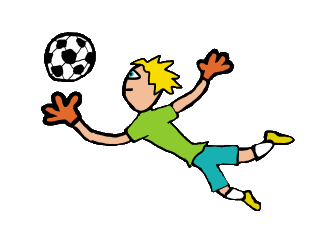 Ireland consistently punches above its weight.  For its size it has a worldwide appeal and influence on many things.

​Gaelic football is one of those.  Football with kicking and rugby with carrying the ball - wrapped into one very fast moving and exciting game.

​The French version is called garlic football.  Not so fast moving but a nice taste. 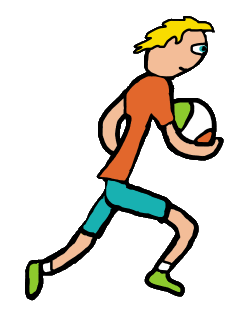 Impressively fast coordinated ball game involves teams of players aiming to throw the ball into a goal at each end.

The ball is relatively small compared to a football and the players can dribble, run and pass to each other.  A goalkeeper defends the small goal. 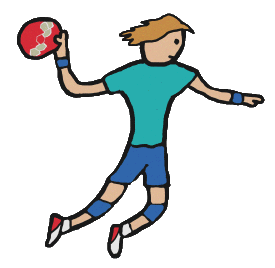 An Irish sport that dates from prehistoric times!  Older than Christianity and almost as brutal.

Played with a hurley which is used to strike the ball either above the goal or into it.

​Described by CNN as being one of the top ten sporting events that you need to see - in second place after the Olympic Games.

The players who are called hurlers wear no protective clothing apart from the plastic helmet.  This is a tough game. 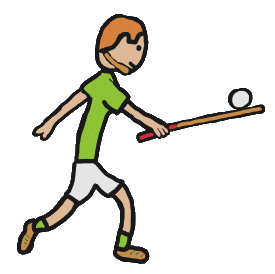 French name for a sport with sticks, a net and a ball.

​A sort of weird hockey where you can carry the ball for a bit before someone hits you. 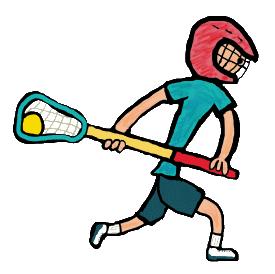 Rugby is played with an odd-shaped ball that doesn't roll properly.

You are allowed to carry it and there is much physical contact.

​It is a tough sport which teaches teamwork, discipline and spirit. 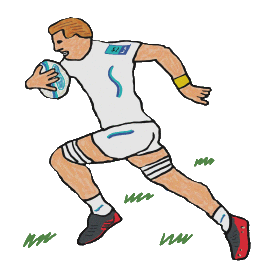 See also football.  Soccer is incredibly popular in the US for children.  It fades away as a major sport in adult life but maybe that will change with money and TV sponsorship.

In the mean time it is a fun sport for school children - boys and girls.  There is a term "Soccer Moms" which covers the endless round of ferrying children to games, watching the games, supporting the team, washing kit - and so on.

A reminder of how sport can and should be before the money men get involved.  Let Soccer Moms rule the world! 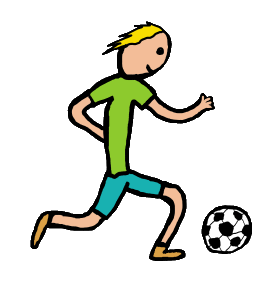 Tug of war must be one of the ultimate team events.

​You need a rope and two teams - preferably evenly matched otherwise it will be a very short event.

Line them up, count to three and shout "pull" or "tug".

Much groaning, grabbing, grunting and straining and eventually one team will pull the other over the line. 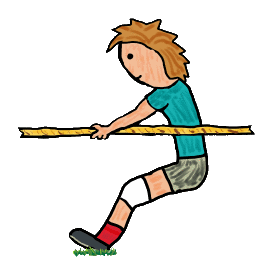