This short story is written in the style of AA Milne's charming characters, especially Winnie the Pooh of course.

It describes the day when the animals of The Hundred Acre Wood receive an important letter from the Mega Corporation.  There are decisions to be made and they look to Christopher Robin to provide the answer.

There is humour and a little sadness, and the story is child friendly with a message about doing the right thing.

​And a happy ending of course!

Although we have all "moved on" since childhood, sometimes there is a simple answer to the enticements and traps of a materialistic adult world.

Most of all I wrote this because I love the Pooh stories and it was my way of expressing that feeling.  And to give my thanks to AA Milne for those precious times of being read to by your parents, and in turn, reading to your own children. 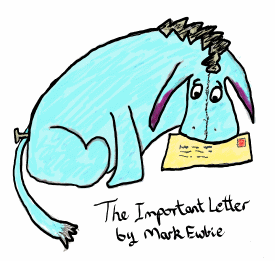 Pooh Gets A Letter

Pooh was puzzled. Someone had pushed something through his letterbox and it wasn’t a pot of honey.

It was a piece of paper with writing on it.

Pooh knew about writing.  He could read "Pooh" and sometimes guess shorter words.

He wasn’t, in his opinion, a stupid bear. And he also wasn’t, in most people’s opinion, an intelligent bear. He was in between. He knew enough about stuff he needed to know, which was mostly honey related and he didn’t need to know much about anything else.

But sometimes life presented challenges and this letter, he knew that much, was one of those things he had to deal with.  He needed to have a big think. And thinking made him hungry. So he chose an especially large pot of honey and got to thinking. And eating.

​After he had thought and eaten for a good thirty minutes he knew what to do. He would collect Piglet and they would visit Owl and ask him to read the letter.

When Pooh arrived at Piglet's house he was met by Piglet rushing out to greet him, clutching a letter in his hand.

Pooh wasn’t sure about this because Piglet had had a birthday last week and he didn’t think you could have two birthdays a year. unless you were the Queen. And Piglet wasn’t the Queen. Plus Pooh knew it wasn’t his birthday and he had the same letter.

“I don’t think it is a birthday thing” said Pooh very carefully so as not to upset Piglet. “I think it is an important thing”. “We need to see Owl”.

​“Oh” said Piglet, slightly disappointed. They headed off to Owl's House with Pooh humming a new hum to cheer up Piglet, while Piglet wondered if a small person could have an extra birthday once in a while, if they had been extra good.

On the way they met up with Tigger who was very excited and extra bouncy.

“I got a letter!!!!” said Tigger, bouncing alarmingly close to Piglet.

Pooh put a protective arm round Piglet and they approached the Great Oak where Owl lived.

Eeyore was stood outside Owl’s front door with a letter in his mouth.

"It’s probably a bill” said Eeyore. “We can’t all have a birthday on the same day”

​Pooh greeted Eeyore and said not to worry.  He knocked on Owl’s front door.

The door opened and there was Owl holding a letter. He looked very intelligent to Pooh and was wearing his best glasses.  They made him look extra important for special occasions.

Owl cleared his throat. A few specks of throat clearing spit landed on Piglet’s jacket but he didn’t say anything. “Now then” said Owl, importantly, “I have received a letter”.

After a few moments it became clear all the letters were the same. This was a relief to Owl who, although being an excellent reader, had not looked forward to reading more than one letter this morning.

“Quiet down!” said Owl sternly and the friends stopped their excited chattering. “It seems we all had the same letter today”.  Owl did not mind stating the obvious and the smaller creatures often needed to be told the same thing several times before they listened.

“From what I can see” continued Owl, “this is a serious matter”.
​
Now Owl had not read every word in the letter as despite being an excellent reader, he was not good with words that had too many letters.  This letter contained a lot of those words.  But Owl had read enough to explain to the crowd.

“This is an important letter” began Owl, and the friends nodded in agreement and hoped it wasn’t going to be too long a speech.

Unfortunately, it was.  Owl's speech contained phrases like "Young people today" and "I still remember".  Pooh wished he’d brought some honey as it was getting near to elevenses.

He didn’t notice when Owl stopped speaking as part way through he had gone into a thought of his own, and then forgotten it, and tried to remember it again.

“So we need to see Christopher Robin” said Owl.

Pooh woke up and brightened. Christopher Robin loved them all and he would know what to do. He should have collected Piglet and gone straight to Christopher Robin’s house instead of coming to see Owl. Then he wouldn’t have had to listen to a long speech which was tiring for a bear of little brain.

Owl had mostly finished talking and they agreed that taking their letters to Christopher Robin was the right thing to do. So the crowd of friends and small creatures set off together.

“I could fetch a pot of honey for the journey” suggested Pooh to Owl, but Owl said this was a serious matter and serious matters demand urgent action.
​
Pooh could not see how anything could be more serious than paying half an hour’s urgent attention to a large pot of honey but no one argues with Owl.

They reached Christopher Robin’s house and he was sat outside waiting for them. “I expected you” he said and offered round biscuits and drinks to the assembly. “This is an important letter”.

“What is it?” they all chorused between mouthfuls of biscuit.

“It is a letter from Mega Corporation” said Christopher Robin.

I should make clear it is a long time since Christopher Robin played in the Hundred Acre Wood. He is old now and those games were long ago.

University educated with a career behind him and now retired, he rarely thinks about the days when the animals and especially Pooh were the main part of his life.

But if they ever needed him he would be there for them. As you journey through life and experience the ups and downs, the friendships, romance, pain and pleasure, there are few times that come close to matching the safety and security of a young child with favourite toys.

These shabby old stuffed animals that stood before him were the best friends he ever had. They had never let him down, said things behind his back or tried to use him. They were solid companions, especially Pooh Bear, and he had always been grateful for that.
​
He thought carefully before he spoke.

He Reads The Letter

“My dear friends of the Hundred Acre Wood, this is an important letter you have received. It is an offer from the Mega Corporation of America to make you richer than you could have dreamed of.  Eeyore could have a brand new field. Pooh, as much honey as you can eat.  A new home for Piglet"

At all this news the animals were getting very excited. Even Eeyore was looking slightly less grumpy. Only Owl was still deep in thought, concentrating on Christopher Robin’s important words.

Christopher Robin continued.
​
“Mega Corp is offering you a percentage of profits from merchandising your characters and building a theme park in the Hundred Acre Wood. You will be rehomed in top of the range accommodation and have financial security for the rest of your lives”.

“Hooray” shouted Tigger.  Some of the smaller animals started dancing and clapping their paws.

“What does rehomed mean?” said Owl.

“It means you will get a new home so they can redevelop the Wood” said Christopher Robin.

Piglet trembled and held on tight to Pooh’s paw. Eeyore looked up from the bit of grass he had been chewing. Tigger stopped bouncing, much to everyone’s relief.

“Move?” they all said in unison.

Christopher Robin nodded. “That’s the offer” he said. “They will give you money in return for taking over the Wood.”

“They call it Progress” muttered Owl and he shook his wise old head in a sad way.

At this point an awful thought came into Piglet's head. He was going to have to say something. Not because of himself you understand and not because he wanted to, but because he had to.

He made himself as big as he possibly could and spoke out loud.

“I d-don’t really want to move” said Piglet. “If you don’t mind me saying, but I l-like the Wood”.

This was a very brave speech to make in front of everybody and they all applauded. Pooh put his arm round Piglet. “I like the Wood too” he said.

Eeyore muttered to himself “I don’t like my damp field but a new one would probably be worse”.

Tigger said “I like bouncing” and they all knew exactly what he meant.

Christopher Robin was old now. A lifetime of writing had not built up much of a pension. That was why he moved back to this run down cottage next to the Hundred Acre Wood.

Extra money would help with the cold winters or he could move to a warmer climate. A chance to end the years in comfort rather than poverty.

In any case, you can't stop Progress.

Christopher Robin looked at his friends and thought deeply. His childhood seemed a long way off now.

The animals looked back at him. They did not have thoughts running through their heads. They knew what little they knew and that was usually enough. It was a long time since they had gathered outside Christopher Robin’s house.

It was one of the quietest ever moments in the Wood.

The silence was broken, not by Eeyore complaining or Tigger bouncing loudly, but by a noise which turned out to be the best sound ever.

​Christopher Robin was tearing up the letter.
The End
Thanks for reading this short story.  I hope you enjoyed it as much as I enjoyed writing it.

This is an Amazon sales link to the original Winnie The Pooh Stories.  I make a small commission from sales, it helps pay for this website.
Home >>